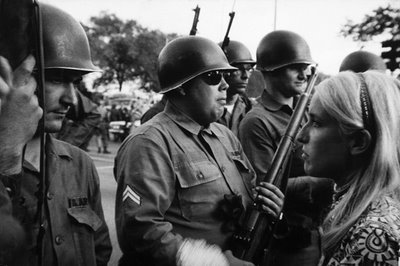 From my review of Weston photographer Ron Pownall’s exhibit “The Whole World Was Watching: Images from the 1968 Chicago Riots” at Panopticon Gallery in Boston:

It was August 28, 1968, and Ron Pownall could feel the storm brewing as he arrived at a Vietnam War protest during the Democratic Convention in Chicago: “The police were chomping at the bit to bust some butts. It was in the air, palpable tension all day.” That afternoon and night it exploded in what a national commission later declared a “police riot.”

Twenty-five of his photos of that day — 40 years ago today — are on view at Panopticon Gallery in “The Whole World Was Watching.” (The title alludes to the demonstrators’ chanting of “The whole world is watching” as the violence was filmed by television news cameras and broadcast around the world.) The anniversary coincides with this week’s Democratic National Convention in Denver, as we look again to replace a Texas president who led the nation into an ill-considered war. 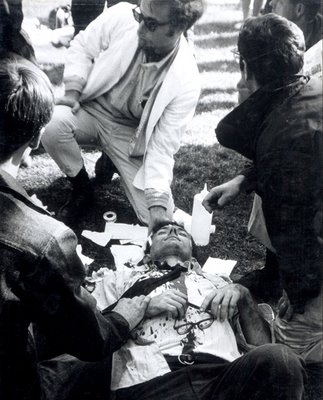