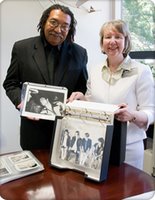 Rhode Island College announced last week that its Bannister Gallery has been given 159 Andy Warhol photos by the Warhol Foundation. The collection, valued at $182,200, includes shots of Bianca Jagger, Pia Zadora, Liza Minnelli, Martin Scorsese, John Travolta, Debbie Harry, Pele, Giorgio Armani, and painter James Wyeth. Bannister director James Montford tells me that he plans to make a brief presentation of the photos this fall -- at a date still to be determined -- and then mount a full exhibit at the gallery next year.

Bannister Gallery applied for the gift after the Warhol Foundation announced in February 2007 that it would make the artist’s work available to college and university art museums throughout the country as part of the foundation’s 20th anniversary. Last October, the Bannister Gallery was selected as one of 183 educational institutions across the country to receive the gift.