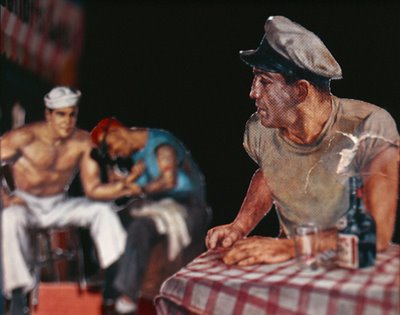 I feel I need to admit that I’ve had a change of heart about New York photographer Thomas Allen, whose show “Cheap Trade” is now at Carroll and Sons. When I first noticed his pulpy photos a couple years ago they struck me as so slick, so flashy, so pleasurable that I was suspicious that there was nothing substantial underneath.

But I’ve decided that this suspicion doesn’t matter and I don’t care, because his images are so wickedly deliciously right. 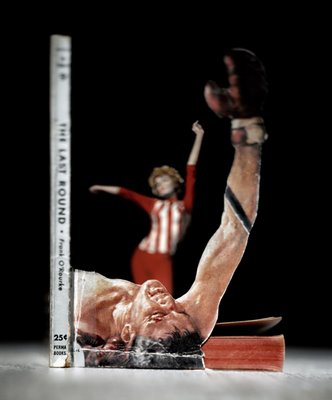 Allen slices out illustrations from the covers of vintage dimestore pulp paperbacks, folds them out, and arranges them into dramatic scenarios that he then photographs in shallow focus to create racy noir dreams of lust and violence. A man looks up from his paper as a fellow in the blurry background strips off his shirt. A boxer, cut from the cover of “The Last Round,” slumps to the mat. Two ladies fight. A sailor turns around in a bar to eye the shirtless sailor getting tattooed behind him. The eyes of a man in a diving helmet bug out at the busty lady behind him.

Part of Allen’s magic is how often the books themselves are part of the scenery, as in a shot of a gunslinger walking into a saloon. The walls of the room are actually the ends of books. Or the shot of two sultry dames eyeing each other around a corner that’s actually the end of a book. It’s marvelously inventive, addictively seductive stuff.