The future of Bread and Puppet 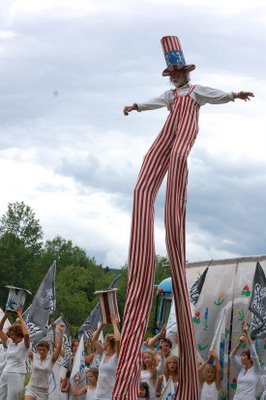 Bread and Puppet Theater founder Peter Schumann (pictured on stilts above) discusses the future of the theater and dancing until the very end of life. The theater will march in the Honk Parade from Somerville to Cambridge on Oct. 12 and perform in Providence from Oct. 15 to 19, in Lawrence on Nov. 9 and 10, and Boston from Jan. 25 to Feb. 1. This is the third and final part of edited excerpts from an Aug. 12 conversation I had with the 74-year-old at the theater’s farm in Glover, Vermont. Read the first part here and the second part here. 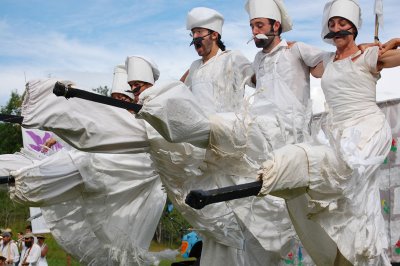 Peter Schumann:
Where is the theater going? What’s your future role? “My role is now is what it is, what you see. But my role in the future has to be discussed, because I’m getting older and this discussion is taking place. It started with the last annual meeting and it’s going on this summer and it’s going to continue until we find some formulas of agreement of what will happen. Is there possibilities of reorganizing the theater as something that survives beyond me? Is that desirable or not? And then it’s the theater but it’s also the museum. It’s not only the museum it’s also the print shop. It’s not only the print shop it’s also the archives. It’s not only the archives, it’s all the storage. It’s all these things. It’s also the Hiroshima garden. It’s also the memorial in the pine forest. It’s also the big people who live this place and have worked here a lot. It’s a lot of things.” Also the asset of the performing spaces. “I see it that way also.”

“I’m trying to be fair. So I have to find something that is not only to my liking but that is a balanced liking of these different participants in this line of thought. There’s my family who’s thinking about this. There’s the old timers, the ‘geezers.’ The younger folks. There’s different levels of people’s interest. The people who live here and the people who don’t live here also. The people who live in Glover, in the area, and who moved into this area” to work with the theater.

In past, you said you weren’t concerned about what happened after you, the theater was meant to be ephemeral. “I think you didn’t misunderstand, but that isn’t good enough. It’s too easy. So there must be something invented before I step out or down or under, whichever way. It needs to be invented. And it depends on lots of discussions with lots of people.” 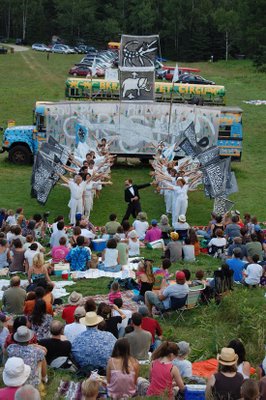 Do you see a Bread and Puppet where you’re not performing, but you’re directing in some way? “I don’t see that. It might happen, but I don’t see that. I see myself dancing with two canes or crutches. And having just as much fun as without the crutches. It comes out of the same conviction that says dance isn’t a school of movement or an aesthetic that gets trained, but dance is any existing movement whatsoever. So it’s the movement of an acrobat as easily as the movement of a cripple. There is no value in the acrobat that the cripple doesn’t also have. There’s just a greatly, greatly different vocabulary and both are very valuable to the dance and the whole. So this idea of the cripple dancing is a necessary ingredient. If you think of a real social dance, of a dance that has meaning in the society, then the cripple must be included.”

Could there be Bread and Puppet repertory? “That’s another one of these prolongation ideas, to create repertory. We haven’t done that and with us repertory is very uneasy, very difficult because we don’t have good documentation and then the pieces are not documentable very easily because they change so much. And they are not scripted. Or if so, the scripts get lost. The scripting is not the basis of them, sculpture is more the basis of them. Often the puppets are destroyed and therefore not possible. Or the whole setting in which they take place is destroyed. It’s difficult to think of. Or the memory of people who have been in them who would be able to recreate the pieces.”

Is there a Bread and Puppet after you that creates new work? Do you have thoughts on that? “I do but I won’t tell them to you. I’ll keep them to myself until I come to the result.”

Photos by The New England Journal of Aesthetic Research