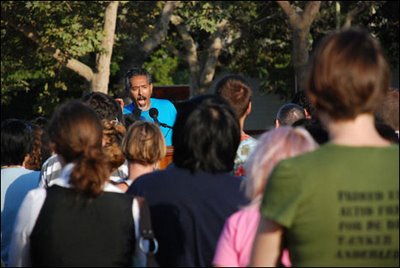 From my report on Mark Tribe’s “Port Huron Project”:

In the fall of 2005, when the artist and curator Mark Tribe began teaching at Brown University in Providence, he was struck by how little protest there was on campus at a time of war.

“My students appeared initially to me to be really apathetic,” Tribe, who is in New York while on sabbatical from Brown’s department of Modern Culture & Media, tells me. “I learned very quickly that they weren’t — that they in fact cared passionately about everything from Iraq to global warming to immigration policy, labor exploitation, in terms of outsourcing manufacturing to Southeast Asia. But they seemed to believe that resistance was futile, or at least that the kind of standard forms of protest that became well known during the Vietnam era were ineffective.”

Instead, his students taught English-as-a-Second-Language classes to “undocumented workers,” fought restrictions on music file sharing, and made documentary videos about Central and South America.

“I started just thinking about how protest had changed in the 40 years since the ’68 national Democratic convention in Chicago,” Tribe says, “or since 1966 when I was born.”

This led Tribe, who is best known for founding the prominent new media art news and archive Web site Rhizome.org in 1996, to launch a series of six re-enactments of “New Left” Vietnam-era protest speeches by the likes of Stokely Carmichael, Angela Davis, Cesar Chavez [re-enactment pictured above], and Peter Potter, with actors delivering the original text at or near where the speech was first given. Tribe called it “The Port Huron Project,” after the 1962 manifesto for social justice, peace and community building by the Students for a Democratic Society when they formed in Port Huron, Michigan.

The project — part art, part protest — began in September 2006 with an actress standing before a modest crowd in New York’s Central Park, reciting a speech that Coretta Scott King gave three weeks after her husband was assassinated in 1968: “The work of peacemaking must continue until the last gun is silent.” The speeches (view them at Tribe’s Web site: nothing.org) call for racial equality, aid for the poor, and an end to the Vietnam War.

The speeches are moving — and disorienting. Tribe purposely selected texts that are alive in their parallels with today — particularly to the war in Iraq.

“Port Huron couldn’t be more timely,” says New York artist and curator Lee Wells, who included The Port Huron Project in an exhibit at New York’s Pace University last fall and is bringing it to upcoming exhibits in Russia. “Outside of them saying Vietnam, these same exact speeches could be given today.”