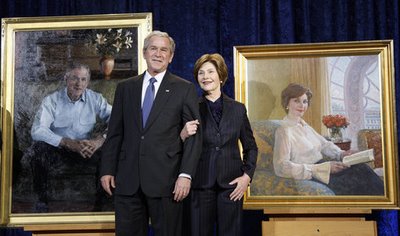 Robert Anderson of Darien, Connecticut, who studied at Boston’s School of the Museum of Fine Arts, painted the portrait of George W. Bush that the president unveiled at the Smithsonian’s National Portrait Gallery yesterday. Anderson, a classmate of the Bush’s at Yale, was selected by the White House and commissioned by the Smithsonian.

“I want to thank my buddy – my college classmate, Bob Anderson, for painting this portrait,” Bush said after unveiling the canvas yesterday. “It actually looks like me, which is a good sign. [Laughter.] You did a fabulous job. This is not the first time that Bob has painted me. He had a warm-up – he did my portrait for the Yale Club. Recently, I asked him what was different this time around. He said, ‘Well, this time around he had to use a lot more gray.’ (Laughter.) I also understood Bob didn't have any difficulty depicting my eyes or my hands – but he had a lot of trouble with my mouth. And I told him, ‘That makes two of us.’ [Laughter.]”

Pictured: George and Laura Bush stand in front of their portraits yesterday after the unveiling. Photo by Eric Draper.