Vote for the 2008 Boston Art Awards

Here is the ballot for the 2008 Boston Art Awards, a contest organized by The New England Journal of Aesthetic Research to honor the best art made in New England (excepting Connecticut) and exhibits organized here in 2008. And you are invited to vote. You!

The ballot is long. Crazy long. More than 60 people contributed some 190 nominations for the 2008 Boston Art Awards. Yes! The process was designed to be open to all, democratic and broadly representative of our community. The resulting ballot – which includes nearly all the nominations – is somewhat messy, despite our best sincere efforts to give it clarity. (Send factual corrections here.) Ah, democracy!

Winners will be chosen by (1) local active art journalists and (2) anyone else who wants to vote – and will be announced in terms of these two separate categories of voters.

How to vote:
Voting is open to all. Voting will be by e-mail. Vote for just one nominee in each category. Be clear. List each category and then your vote in each category. We suggest copying the ballot into an e-mail, and deleting all but the stuff you’re voting for. It’s okay to vote for yourself – everyone’s doing it. You don’t have to vote in every category. Of course, you may only vote for stuff you have seen. And you may only submit one completed ballot. Anyone breaking these rules will be banished. Email your votes to here. Put “Vote” in the subject line. 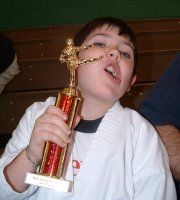 The New England Journal of Aesthetic Research will tally the votes. Nominees with the most votes in each category will win. Winners will be announced at the 2008 Boston Art Awards Ball from 6 to 8 p.m. Monday, Feb. 2, at the Beehive at the Boston Center for the Arts, 541 Tremont St., Boston. The event, which we’ve teamed up with Big Red & Shiny to present (thank you Redheads), is free and open to all. Creative evening attire is encouraged. So please join us for cocktails, toasts to great art, and awkward speeches as we support art from New England.

Please contact us with any questions, suggestions, complaints, dire warnings. And please vote.

A note on the composition of the ballot:
More than 60 people contributed some 190 nominations for the 2008 Boston Art Awards. We rejected about two dozen nominations. For gallery shows, solo shows that did not feature New England artists (excepting Connecticut) were excluded. Shows by artists from Away that were not curated by local curators or specifically for local institutions were excluded. Shows that didn’t happen in 2008 were excluded. A few things like theatrical productions and arts journalism (The Journal and Big Red & Shiny received nominations) that are not categories under consideration for awards this year were excluded. But you’re all still winners in our hearts.