“The Triumph of Marriage” at Gardner 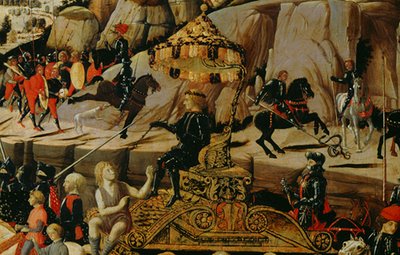 From my review of “The Triumph of Marriage” at the Isabella Stewart Gardner Museum in Boston:

If you've been desirous of an eminently tasteful exhibit that undermines the sanctity of marriage, the Isabella Stewart Gardner Museum's "The Triumph of Marriage: Painted Cassoni of the Renaissance" may be for you.

Oh, I exaggerate. A bit. But how better to introduce a lovely little show whose highlights include a pair of delicately rendered Renaissance paintings depicting the tale of the ancient Greek prince Antiochus, who had the hots for his young stepmom, Stratonice? (It's also the subject of next year's Boston Early Music Festival opera production, Christoph Graupner's Antiochus und Stratonica.) The first painting finds the prince sick with love. He appears next — as an exhibit brochure politely explains — "dangling a military baton: his secret love has sapped his strength." (Wink, wink.) A doc explains what's up to his dad. Off stage, the king generously annuls his marriage so that his son can wed his wife; he also gives the lad half his kingdom. The second panel shows the young 'uns getting hitched by the king and a wedding party.

"To give to another his beloved spouse," the 14th-century Italian poet Petrarch wrote when recounting the tale, "O utmost love, unheard-of courtesy." The moral of the story might be something about the sacrifices of marriage and serving the greater good of the community.

"The Triumph of Marriage," which was organized for the Gardner by Cristelle Baskins, chair of Tufts University's Art & Art History Department, is a sharply focused scholarly show of 16 paintings (including four matched groups) that originally served as panels of cassoni, or Renaissance hope chests.