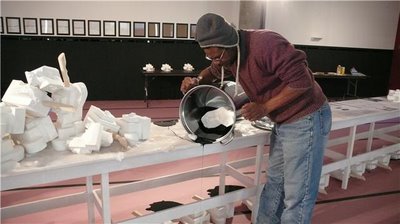 On February 19, Maine artist William Pope.L spoke and organized a performance at Harvard's Carpenter Center, where he's also having an exhibit called "Corbu Pops." I'd seen an exhibition of his annoying doodles of worms and rockets (lots of penis references) at the Art Institute of Chicago in late 2007 and thought it was a total waste of time.

But I'd decided to give Pope.L, the self-described "friendliest black artist in America," another try. His performance The Great White Way, 22 Miles, 5 Years, 1 Street, in which he crawled along New York's Broadway in a Superman costume, sounded interesting. Also in his favor, in 2001, the chairman of the National Endowment for the Arts overturned a recommendation by the NEA's advisory panel to fund an exhibit of his work. And, hey, he was in the 2002 Whitney Biennial.

But it's difficult to describe how excruciatingly, irritatingly tedious and vacuous his stuff at Harvard is. The show is dominated by a long table that has pots brimming with black paint and cast models of the Le Corbusier–designed Carpenter Center building. The models are stuck on sticks, like popsicles. "Corbu Pops," get it? At the opening there was a performance: people in ugly baby-face rubber masks and black Corbusier-style glasses moaned and cried and laughed and spoke gibberish.

For a number of years now, it's been trendy for artists to create new site-specific projects that tap into the history or the nature of the sites where they're exhibiting. Too often, these artists engage with the place in a shallow, cursory way that feels worse than if they hadn't bothered at all. Here Pope.L combines the worst of empty site-specific art with the worst of neo-Dada. The year's still young, but this one leads the field for Lousiest Show of 2009. 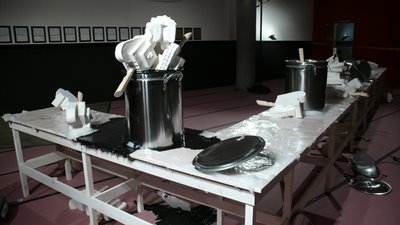