“The Deceptive Narrative” at AIB 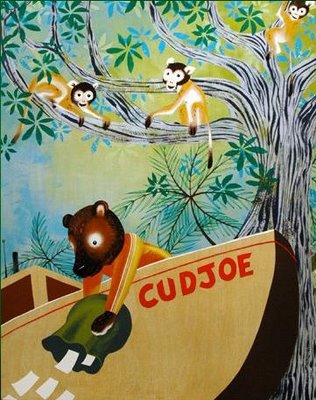 I wasn’t sure how to decipher a catchy scene of a bear dumping a bag of paper over the side of a boat as monkeys smile down from a tree above. But texts in a couple of the paintings clued me in to Brandou’s subject: Jim Jones’s San Francisco cult which moved to Guyana and committed mass suicide, killing more than 900 people, in 1978.

In Brandou’s paintings, Jones becomes a leisure-suited lion with aviator sunglasses. In one, a rabbit embraces a sad fox as the lion seemingly tells of burning hands reaching out of a hellish red river and giant floating skulls (which are manifest behind him). Brandou’s titles are long and written in dialect. The full title of the piece is actually, “Jim’s River: Slow Fire Ah Boil Hard Cow-Heel.”

In “Healer,” a cat and rabbit nervously watch as the lion seems to pull the heart out of an ill rabbit’s chest. In “Runaways,” The mass suicide becomes a row of bunnies in the rain running away from a giant tarantula in a bloody pavilion.

One of my pet peeves is art that riffs on famous murders. It tends to be sensational and shallow and as a result feels exploitive. In an artist statement, Brandou says he doesn’t have any direct connection to what happened, besides hearing about it on the news as a kid. His idea seems to be what a child would make of the crimes, how a child might imagine its unfathomable awfulness. He almost pulls off this loaded subject, but not quite – it comes across as a blithe riff on a great horror.

The two other artists in the show are Naoe Suzuki of Boston and Christine Murphy of New York. Suzuki’s 2006 to 2008 series “Splendor of Amazing Boys, Girls and Animals,” rendered in mineral pigment and gouache on paper, depicts little children in demented circusy scenes involving strange appliances, bears, rabbits, lions and elephants. Her pictures feel pinched, trying too hard to be surreal. So she’s not able to pull off the campiness, dark wit or creepiness to make this sort of stuff sing.

Christine Murphy of New York offers bizarre cut-paper scenes in her 2008 to 2009 series “Sometimes You Get the Bear and Sometimes the Bear Gets You.” One features a vortex in the sky, a pink Blackhawk chopper, and hands reaching up from bushes. Another shows bear-people, some with trees sprouting from their backs, puking blood. Murphy obviously puts in a lot of effort, but her allegories don’t add up and her sour colors are a turn off.

Pictured from top to bottom: Andrew Brandou “Cudjoe: WHEN YUH DEH IN BAD LUCK WET PAPER SELF AH CUT YUH,” “Runaways: EVERY BUSH A MAN NIGHT TIME,” “Healer: THE LOOKS AH DE PUDDING IS NOT DE TASTE,” “Jim’s River: SLOW FIRE AH BOIL HARD COW-HEEL,” and “Masks: NAH EVERY BIG HEAD GET SENSE”; Naoe Suzuki “Splendor of Amazing Boys, Girls, and Animals #3” and “Splendor of Amazing Boys, Girls, and Animals #2”; and Christine Murphy installation shot, “Here I Am” and “He Does Only What He Sees.” 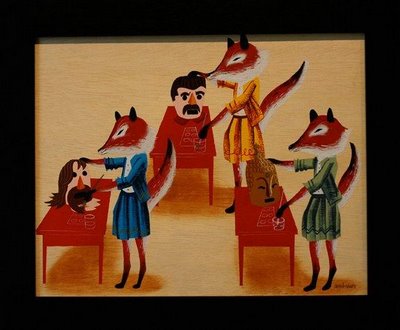 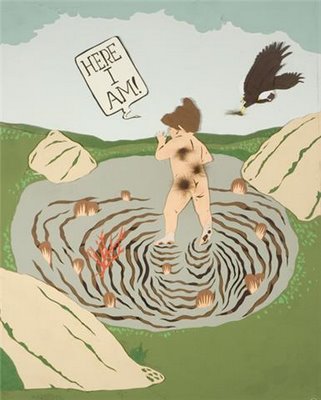 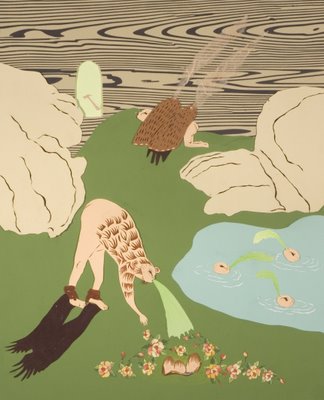