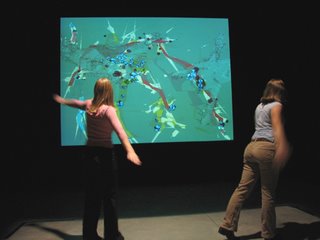 No artists living in New England were named 2009 MacArthur “Geniuses” last week, though a bunch of Boston-area scientists are honored. But it’s worth noting that "Genius" Camille Utterback, a 39-year-old digital artist in San Francisco, grew up near Boston. You may remember her work at Art Interactive in Cambridge during the 2007 Boston Cyberarts Festival. Cameras turned visitors' shuffling through the gallery into abstract doodles projected on the walls. (Pictured: Utterback’s “Untitled 6,” 2005.)

“I was born in Indiana, but my folks moved to the Boston area when I was 3,” Utterback tells me by e-mail. “I lived on the North Shore (Lynnfield) until leaving for Williams College out in western Mass. After college I moved back to Jamaica Plain where I stayed for almost 4 years until I moved to New York for grad school.”

Related: Last October, Boston’s Institute of Contemporary Art opened a survey of New York sculptor Tara Donovan just after she won a MacArthur “Genius” grant. Her ICA show overlapped with the end of the ICA’s spring exhibit “Street Level: Mark Bradford, William Cordova and Robin Rhode,” which was organized by Duke University’s Nasher Museum. Bradford, who lives in Los Angeles, was among this year’s MacArthur winners. So for about nine days last fall, the ICA had two official “Geniuses” on the walls.