From my review of Boston painter Joe Wardwell’s exhibit “Die Young” at LaMontagne Gallery in Boston:

One of the great themes in America is nostalgia for the "good old days," which flame into being and then fade into the distance. It's the anxiety that we've just missed the cool party, that paradise has been lost. And it's twinned with the idea that you better rush out and seize the day, because tomorrow it will all be over.

It's often been tied to nature. It courses through the American landscapes of the 19th-century Hudson River School painters, canvases filled with nostalgia for a wild, "pure" America that the artists fear is being eaten up by the Industrial Revolution. It percolates through 19th-century Transcendentalism, as when Henry David Thoreau dashes into the Concord woods in the 1850s to "learn what it had to teach, and not, when I came to die, discover that I had not lived."

It's what F. Scott Fitzgerald is talking about at the end of The Great Gatsby when he writes that "Gatsby believed in the green light, the orgiastic future that year by year recedes before us." It's what Neil Young sings about: "It's better to burn out than fade away."

It's that theme — racing forward to get to the paradise in the rear-view mirror — that Boston painter Joe Wardwell taps in "Die Young" at LaMontagne Gallery. The canvases show rock lyrics (Black Sabbath, Slayer, Def Leppard) flaming across romantic landscapes — pictures like the bastard children of swooning Hudson River School scenes and swaggering rock-album covers.

Pictured from top to bottom: Joe Wardwell, “Burn Out,” “Fade Away,” “Out There,” “Any Wonder” and “untitled (speaker painting).” 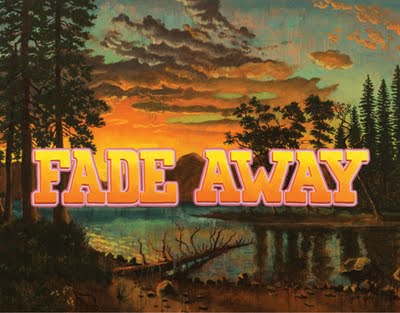 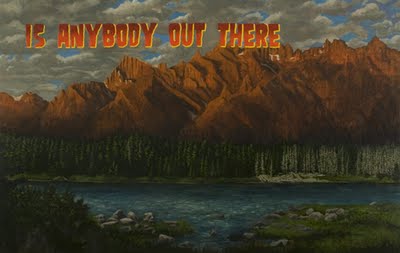 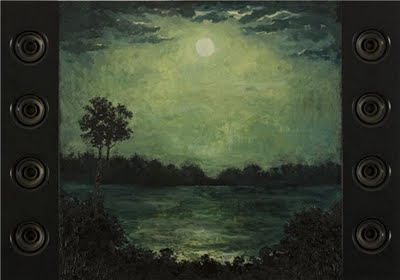 Thank you so much for articulating this concept. I've been living with it my whole life, and I hate the hounded feeling it can give me. One thing though,The key is to do something cool so that the rear view mirror you see it in is your own, and not a pasted in view from somebody else's experience. It's too easy to let consuming other people's images vicariously become a substitute for your own.