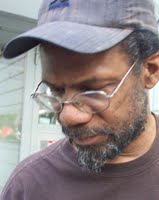 Maine artist William Pope.L has been named one of three artist finalists for the $100,000 Ordway Prize, which is administered by New York’s New Museum and Creative Link for the Arts. The juried prize, which is expected to be announced early next year, celebrates a midcareer artist – ages 40 to 65 – “whose work has had significant impact on the field of contemporary art, but who has yet to receive broad public recognition.”

Pope L. exhibited his “Corbu Pops” show at Harvard’s Carpenter Center early this year (we said then: “The year's still young, but this one leads the field for Lousiest Show of 2009”) and was commissioned to recreate Allan Kaprow’s 1961 pile of tires “Yard” installation at New York’s Hauser & Wirth gallery in September. He was born in 1955 in Newark, New Jersey, and currently lives and works in Maine, where he lectures at Bates College.