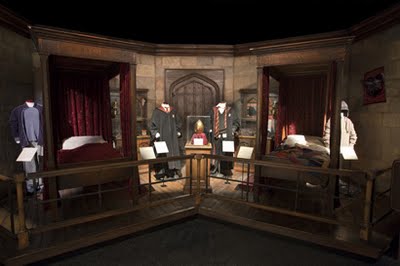 From my review of “Harry Potter: The Exhibitition” at Boston’s Museum of Science:

At “Harry Potter: The Exhibition” at the Museum of Science, when a robed attendant places the sorting hat on a visitor’s head and soon after a door whooshes open to reveal the Hogwarts Express breathing steam and broadcasting train sound effects, you find yourself filled with the kind of giddy expectation you feel when you get your hands on a Potter book on the day it’s released.

It’s the anticipatory thrill of setting off for adventure and, you know, magic. “Harry Potter: The Exhibit,” a wondrous selection of costumes and props from the movies displayed in sets lavishly constructed for the exhibit, delivers Hollywood star wattage, holy Potter relics, and the rush of nostalgia of (re)visiting this place we’ve heard so much about.

After the train, you walk past a witty video portrait of the Fat Lady guarding the Gryffindor dorm at Hogwarts School of Witchcraft and Wizardry. She tries to sing the right note to shatter a glass, fails, and surreptitiously smashes the glass on a wall. A bedroom displays sacred artifacts: Harry’s Marauder’s Map, his Hogwarts acceptance letter, his signature round glasses. Feel the gravitational pull of standing at the magnetic core of a great new societal myth.

Pictured from top to bottom: Harry Potter™ and Ron Weasley's dormitory room; Harry Potter's wand, eyeglasses and the Marauder's Map that was given to Harry by Fred and George Weasley in “Harry Potter and the Prisoner of Azkaban”; interior of Hagrid's hut, with items as seen throughout the “Harry Potter” films, including a chair, table and chandelier; and kids pulling up Mandrakes in the herbology area of the exhibit. All photos © Chris Hollo, Hollo Photographics, Inc. 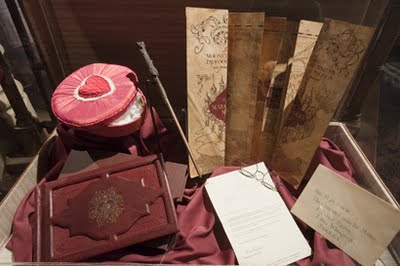 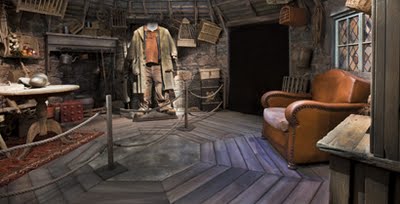 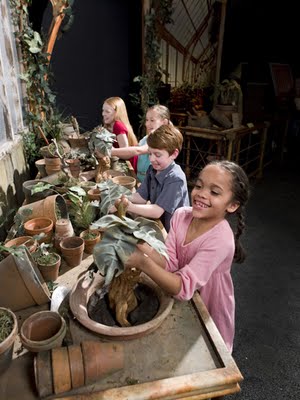