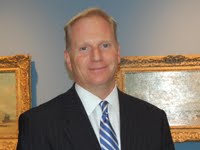 He takes over from Michael K. Komanecky, the museum's chief curator, who has served as the museum’s interim director since director Lora Urbanelli left in January 2009 to become director of the Montclair Art Museum. Komanecky, who continued to organize exhibitions like Jamie Wyeth’s “Seven Deadly Sins” and “Robert Indiana and The Star of Hope” while serving as interim director, will return to his chief curator post.

Farnsworth Board of Trustees President Richard Aroneau said in a prepared statement that under Brownawell's "leadership, the Academy Art Museum, which serves a community with many parallels to Rockland, significantly grew its collections, education programs, audiences, facilities and endowment. Chris directed two successful capital expansion programs adding 28,000 square feet of program space and raised over $25 million in support for the museum over his tenure.”

Brownawell worked at the Smithsonian American Art Museum, the Pennsylvania Historical and Museum Commission, and the Commonwealth Conservation Center during undergraduate and graduate internships, before becoming a curator at the Academy Art Museum in 1988.

The Farnworth has the Global Wyeth Tracking Center doesn't it?