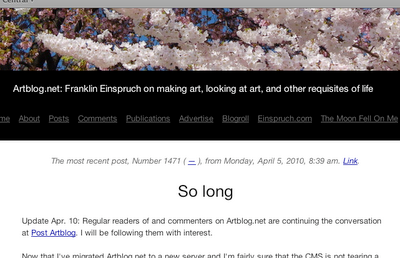 Sad news arrived on April 5 when Boston blogger Franklin Einspruch announced with a post titled “So long” that he would be ending his long-running Artblog.net.

Artblog.net has occupied a landmark place in art blogging because it was one of the founding art blogs – begun so early, in fact, that it was able to claim the name Artblog.net. Einspruch started the blog in 2003 while living in Miami, where it won a “Best Local Website” award from the Miami New Times in 2005. That year he had a residency to Taiwan, then moved to Boston in 2006, where he says intended to stay, but in 2007 was offered a yearlong teaching gig in Orange County, California. Afterward in 2008, he had a big cross-country RV adventure while to moving back to Boston.

Artblog.net’s structure – a mix of the broad view with the personal, of clear thoughtful commentary with (occasionally) Einspruch's own art – reflects its nature as a blog formed before the style of blogs become more codified, more narrowly focused, more magazine-like. And it had one of the most sharp and lively comments sections this side of Roger Ebert’s Journal.

Since Einspruch’s “So long” post, members of his audience have launched their own blog [Post] Artblog.net. It begins with the kind of wit that made Artblog.net a delight to read: “The name of this blog draws from that central idea and the art truism that any art related topic with the word 'post' in it seems to garner a lot of critical acclaim and notoriety simply for being so named.” Our online communities are (perhaps) surprisingly sticky. Long may the blog live!

Below Einspruch was kind enough to answer some of our questions via e-mail.

Why are you taking a hiatus from Artblog.net?

I see Artblog.net as a completed project. If you end a party at the right time, everybody feels a little awkward, because they want it to continue but know that if it does, it won't be as good as it has been. I feel that the blog had gotten to that point. Artblog.net was at once an artistic, intellectual, and social phenomenon that harnessed the energies of a small group of dedicated, patently visual art lovers. But I felt that we had hammered out every point that needed making and it was time to release those energies, especially mine, into other projects.

How long have you been doing it?

Artblog.net ended just shy of its seventh birthday. I was involved in the establishment of an online art magazine in Miami 2000, at the behest of the dealer Bernice Steinbaum, who was trying to light a fire under the seat of the local art world's pants at the time. (This was two years before the first Art Basel/Miami Beach, which probably goes to show how much more efficient money is than criticism as an art-world fuel.) I stepped down as the Miami Art Exchange's founding editor in 2001; the site still runs as the personal project of Onajide Shabaka, who lives in Ft. Lauderdale and was closely involved with MAEx at the time. Afterwards I ran a site called The Sunburn for a couple of years, which featured my sporadic arts commentary, and started as static HTML pages. By then blogging was starting to catch on, and to my amazement the domain name Artblog.net hadn't been taken, so that began in 2003 and ended this month. In total I've been doing this in one form or another for ten years.

What have you gotten out of it or learned from it?

I learned an enormous amount about human nature: what people are willing to claim as true given the opportunity to speak freely under a self-selected amount of anonymity. I learned to talk about the fundamentals of the artistic experience, quality and taste, as real phenomena and not some kind of relativist, social construct. I learned to despise and combat the academic attitude towards art, which has covered the art world like a blanket of smog. I learned how to make a case for art as a visual thing, rather than a philosophical one. My ability to write grew by leaps. And I had a conversation, one that grew in sophistication over the course of seven years, with some brilliant minds about the nature of art and the art world. Is was an amazing apprenticeship. I also learned the extent to which this essentially visual approach lies outside the establishment mainstream, which is academic to the core.

What do you see as the power, purpose, potential of these sorts of blogs? What can they accomplish?

At this point, I'm not sure. Five, six, and seven years ago, blogging was an exciting alternative to the mainstream media, a way to make an end run around the official gatekeepers and make your thoughts publicly accessible to a degree never before possible. This was before there were tens of millions of blogs and before the mainstream media started blogging. Also, Artblog.net used to draw spirited disagreement from people who had wholly different takes on art than mine, and that stopped more or less all at once about a year and a half ago coincidentally with the rise of popularity of Facebook and Twitter. In 2004 you could make a big splash by putting up a blog. Now maintaining a credible public presence as a writer requires both self-publishing (a blog, a Facebook page, and/or a Twitter account), and what we might call other-publishing, regular appearances in print or on other peoples' sites. Only having the first makes you look like a crank, and only having the second makes you look like a dinosaur. Microblogging made it too easy to self-publish for anyone to make a name for himself as a writer that way.

We may be in a post-criticism art world, one that will freely allow Dakis Joannou to turn the New Museum into a vanity gallery, or allow the Rubells to use the Brooklyn Museum for entirely private purposes, or nonchalantly appoint Jeffrey Deitch to direct MoCA, and otherwise threaten to turn the whole contemporary art scene into a giant put-up job. I doubt that the blogs, or even the newspapers, have the power to stop this. But certain writers employing the blog-Twitter-Facebook combo have successfully poisoned the PR coming out of these establishments, and certainly your work as a blogger has been important in combating the disinformation campaign emanating from the Rose Museum. So we shouldn't give up just yet.

One of the problems we have to look at as art writers is whether or not what we're doing is ever going to aggregate into literature. The writings of Clement Greenberg or Fairfield Porter, collectively, seem to do this. We have to write at a high level over the course of many years if want to hope to accomplish that. I think we ought to reflect on your question about power, purpose, and potential in that light. Will blogging allow for literature? It could, but frequent posting doesn't lend itself to it. Microblogging makes it impossible. Newspaper writing often has its own constraints, of course, but largely it has been enabling.

Are you still blogging elsewhere – or are you taking a break from blogging all together? What will you be doing instead?

On May 3 I'm going to start journaling again at an updated version of einspruch.com. The format will be entirely different, as will the publishing schedule, and I'm not going to try to produce the full-length criticism that I wrote as a blogger back in Miami. I'm looking at Thoreau and Montaigne for inspiration. I've come to realize that it benefits me personally and professionally if I let other people publish my criticism instead of self-publishing it – the involvement of other people insulates me from some of the side effects of damning somebody's work in public.

In a way, I miss what Artblog.net was before it became thinkable that it might generate revenue, or establish itself as a arts publication in its own right, or serve as a bastion of modernist thought. It was more free, and I was more free. At the journal, I'm hoping to cultivate the informality and sincere disclosure that drew readers in the first place. Art demands alternating commitment and reinvention in order to maintain the vitality of your chosen activity. It's like drilling for oil – you commit to explore the current location and move on when the well dries. Personally, I'm due for a reinvention.