A Nightlight Team “Brother, Can You Spare a Dime” Investigation 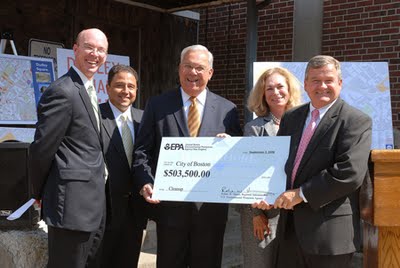 In December 2008, Boston Mayor Thomas Menino (in the center above) told the Boston Chamber of Commerce that he planned to form a task force to look into “disparities” in what local hospitals, colleges and other tax-exempt nonprofits pay the city as a sort of voluntary tax. “Menino called on the need to create an equitable PILOT (Payments in Lieu of Taxes) system so that these relationships are fairer and generate more value, both in payments and in programs,” the mayor’s office then reported.

Last week, the nine-member PILOT Task Force, which has been meeting since January 2009, called on local tax-exempt nonprofits to increase their voluntary financial contributions to the city to 25 percent (pdf) of what they would owe if they had to pay taxes. Right now most nonprofits voluntarily pay less than 5 percent of what they, uh, don’t owe. (More details at bottom.)

As the city is pushing mid-sized and large nonprofits to pay more than they actually owe in taxes, the city and state continue to approve special million dollar tax breaks for big local businesses, allowing them to pay less than what they owe – like the $38.5 million in city and state tax breaks over two decades recently bestowed upon insurance giant Liberty Mutual to help it build a new office tower in Boston.

Tax revenues have become critical for the city as it – like government at all levels – continues to struggle financially in the lousy economy. For example, on Friday, April 9, the city’s Library Board of Trustees announced belt-tightening plans to close four public libraries and cut 94 jobs across the library system. (The announcement from the mayor’s office accentuates the positive: “Twenty-two BPL Branches to Remain Open with Current Hours.”)

Local nonprofits should pay their fair share of the city’s costs for fire, police and other services – but our laws say their fair share is nearly nothing, because we as a community have decided to subsidize hospitals and schools’ good works. In the “spirit of partnership,” the PILOT Task Force doesn’t push for a law changing the tax exemption for nonprofits. Very kind of them.

But why are we subsidizing big business, while Boston closes libraries and begs nonprofits for cash? Once the mayor’s task force finishes pressuring nonprofits to pay money they don’t owe, perhaps the committee can study the equity of the city and state’s special tax breaks for big business. These handouts have to be made up for somehow. It means some of us (in this case nonprofits) must pay more while all of us receive less of the services we pay for via our taxes (libraries, police, teachers, arts grants, etc.).