New gig for Brandeis pres, PR folks not so lucky

Also no future Rose exhibits have been announced. 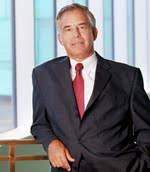 Brandeis President Jehuda Reinharz (at left), a key leader in the January 2009 proposal to shut down the Waltham university’s Rose Art Museum and sell off its collection, has landed a new job leading the Mandel Foundation, the university reports. Meanwhile three members of the school’s office of communications have been fired as part of a “restructuring,” according to a report by the Brandeis student newspaper The Justice.

Reinharz announced last September that he would be stepping down, eventually. Last week the school announced that he will become president of the Mandel Foundation, “an internationally recognized philanthropy that provides leadership to non-profits in the United States and Israel.” The foundation has made major donations to Brandeis, including helping fund the Mandel Center for the Humanities, which is scheduled to open this fall. Reinharz has been at trustee of the Mandel Foundation since 2005. Barbara Mandel, wife of the foundation’s current chairman and CEO of the foundation, Morton Mandel, has been a Brandeis trustee since 2005 – which means she was one of the folks approving the plan to kill the Rose.

Brandeis reports that Reinharz will continue working as the university’s president until “a new president arrives on campus” or June 30, 2011, whichever comes first. A search for Reinharz’s replacement at Brandeis is underway, the school reports.

The Justice reports that Brandeis Assistant Vice President of Communications Ken Gornstein, Director of Media Relations Dennis Nealon and Communications Operations Supervisor Sossy Megerdichian have been canned. Senior Vice President of Communications and External Affairs Andrew Gully did not respond to our questions about this – including whether these changes had anything to do with the changes at the Rose. Remember that the crisis management public relations firm Rasky Baerlein Strategic Communications was hired by Brandeis early last year – funded with a 10 percent pay cut from Reinharz and Brandeis Executive Vice President and Chief Operating Officer Peter French – to help deal with outcry over their handling of the Rose. Gully told the Justice: "The Communications Department has been restructured so we can be better positioned to reach the long-term communications and marketing goals that we're developing for Brandeis. The changes are the result of an assessment I began when I arrived on campus in November."

Also there seems to be no news yet about the search for a new education director for the Rose and a curator/arts coordinator for Brandeis’s Women’s Studies Research Center, which was founded and is run by Reinharz’s wife Shula. The center will be presenting a new exhibit “Science of Art: Recent work by Guhapriya Ranganathan and Nancy Selvage” from April 28 to June 30, which means that the center will present three exhibitions this school year (earlier it offered Roberta Paul and Andi Arnovitz) compared to just one at the Rose. “The Rose Art Museum at Brandeis: Works from the Collection” exhibit, which has been on view since Oct. 28, is scheduled to close on May 23. No future Rose exhibitions or events have been announced.

We asked Gully about all these things. He responded on Friday: “We're almost ready to announce those details, but need a few more days. Hope to share them with you mid- to late next week.” Stay tuned.