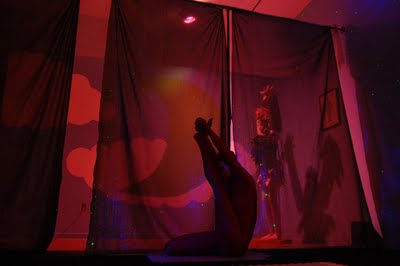 New York artist Saya Woolfalk gave a talk/performance at Tufts University on April 2 as part of her “The Institute for the Analysis of Empathy” exhibit. Dressed in a burgundy velvet sportcoat with a rainbow tie – Charles Darwin crossed with Willy Wonka – she gave a dry slide lecture about finding bones of a No Placean, a future human-plant hybrid race in woods in upstate New York. She described how contact with the skeleton mutated her DNA (“a human one fused with a No Placean”) causing her body to glow green when near the skeleton and to sprout leaves. As Woolfalk talked, a woman in a form-fitting red bodysuit performed yoga poses, representing, if I understood it correctly, someone transformed by closeness to Woolfalk after she’d been mutated. Then Woolfalk lead the audience among her soft-sculpture costumes in the gallery, explaining, “Each No Placean becomes all of these different forms over the course of their lifetime.” 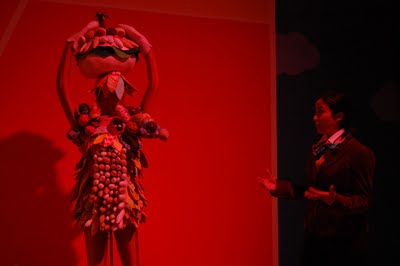 These costumes remain strikingly original and strange – because of their cartoony, crafty inventiveness, because they so often obscure the wearer’s face with numerous stuffed pods that resist our attempts to read a face into them. But as Woolfalk explains more of her invented mythology and switches from the charismatically odd ritualistic dances of her earlier work to more familiar yoga, she loses some of the mystery that has made her art so compelling.

At the end of her talk, a man in the audience asked what would happen if we had contact with the skeleton? “You would experience all of the benefits of becoming a No Placean without any of the physical changes,” Woolfalk answered. How would you know, the man asked. Woolfalk answered: “That’s what we’re trying to determine now: What would it be for a human to be more like a plant?”

Previously:
March 19, 2010: Our review of Woolfalk’s "The Institute for the Analysis of Empathy” installation at Tufts.
Jan. 15, 2010: Our interview with Woolfalk. 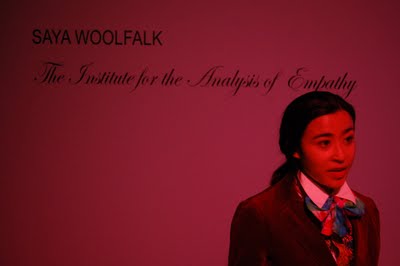 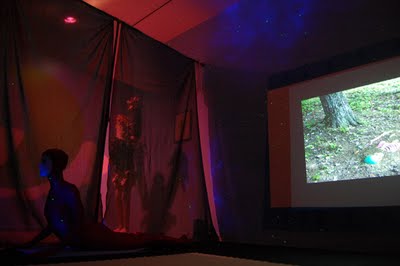 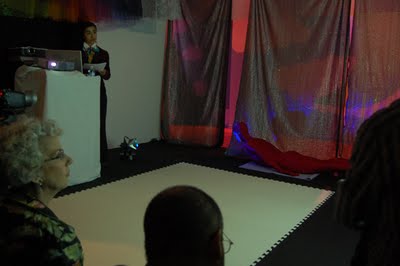 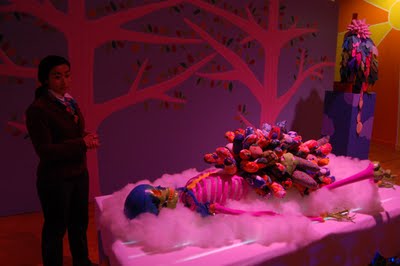 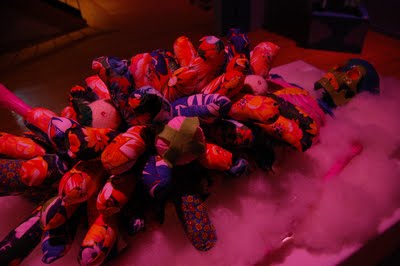 Like 2001: A Space Odtyssey, the visuals are far more interesitng than the story behind it, the Matrix too. The more you know the less there is. Best to let imaginations roam, and not go too far in, as there isnt much there. It is therapy, an obsessive-compulsive show of exhbitionist insecurities.

Life is wonderful, start living it. And show thanks for all we have been given. We, and especially she, have been greatly blessed. Whining is for children, and not mature responsible adults, for whom creative art is made.

Definitely, art collegia delenda est
Fine art colleges must be destroyed
Save the Watts Towers, tear down these Ivory daycare centers for soft and spoiled children