Plus: She performs at Tufts University on April 2 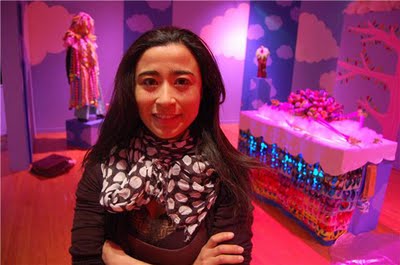 On Jan. 15, we spoke with Saya Woolfalk at Tufts University Art Gallery in Medford, Massachusetts, where her installation "The Institute for the Analysis of Empathy" is on view through April 4. (See our review here.) She performs at the gallery at noon on April 2. Below are excerpts from our interview in which she talks about the mythology she's invented for recent works like "Ethnography of No Place" and discusses her influences.

"’No Place’ is utopia, from the Greek. The idea was to construct a whole other system, and in the system people are part plant and part human, and change color and gender, and now are affecting the people in 2010 and mutating their genetic materials to become more like them. So kind of trying to capture the dreams and desires of people that I speak to on a daily basis. ... So we dream and desire for this. Well what would it look like, what could it look like? These people change color and gender so what would it look like to have a world where difference is something which is constantly mutating and is explicit?"

"Right now there are actually three temporalities. There's the present, so 2010. Then there's the future of the future, 'No Place,' which is represented in ‘Ethnography of No Place.’ And then in between those two is a future dystopian world called 'The Land of the Pleasure of Machines.' ... It's actually a part of the ‘Empathic Imaginaries’ video, it's an animation at the end of the video. ... They are all represented here, but the ones that I'm really focused on right now are the Empathics, which is ‘Empathic Imaginaries,’ and 'No Place,' which is the past project. In ‘Ethnography of No Place,’ Rachel Lears and I decided to work together on a collaborative project kind of in response to the ideas that I was being exposed to in the Whitney [Museum's Independent Study] Program. And so we decided we'd construct a future utopian world where we could play with ideas and come up with what would a future utopian world look like. We kind of culled the imaginations of people who we came in contact with, curators and studio assistants I had at the time, their logic became part of the piece. I made one chapter for the Japan Society for their butoh festival, so one chapter became about death and dying. So taking the world, capturing information from it, and then transforming it into this material for this future utopian world, that was the process of the production. And doing it with this anthropologist, so everything in the video is documented in kind of pseudo ethnographic tone. But, you know, there's a little bit of a critique of anthropology thrown in too, the failures of anthropology, because we also kind of created this subjectivized anthropologist. It's not a truth-speaking person, it's someone who has a subjective position and understands their own limitations and failures and expresses it in the context of this document."

"It's called ‘No Place’ for a reason. It's not supposed to necessarily be a utopia. It's just a kind of thought experiment that doesn't put out any rules or regulations or specificities. Utopian projects generally have very specific rules that say these are the things that would produce a utopia. Part of this project is that it leaves is more ambiguous. And it constantly changes. With more information that gets captured by the people who I'm in touch with or talk to or collaborate with the contours of the place change. Maybe it's more of a kind of actual life project, where the criteria for what desire looks like changes over time."

"Women in the woods of upstate New York find the bones of a No Placean they're the people from the future. And they excavate the site and from contact with the bones they start changing. And so this is more of a kind of rumination on how human beings could actually biologically, spiritually, collectively become something which they are not already, which they desire to be. That's what the project is about."

"It is about what people dream or long for. And that kind of goes back to feminist projects, which was in part about trying to capture longing, or there was a lot about the desires of women, what they look like and how they are represented. Which is basically the foundation of the entire project. The easiest one to point to is ‘Womanhouse,’ where groups of women got together and attempted to insert representations of their own experiences into this collectively run building in Fresno, California. ... With the Empathics, it's every clear. It's not going to necessarily be groups of women in the permutations into the future because I don't want to limit it to women's perspectives. As it is now, the group of women I work with, we use a kind of model like the ‘Womanhouse’ model. I went and looked at how ‘Womanhouse’ actually produced some of its projects. ... Women get together, they kind of brainstorm, they kind of collectively develop a project, and then they perform a piece or they produce an artwork. And that was the strategy, the method that we used to actually choreograph the performance. So that's a very direct example. But also in the do-it-yourself approach, the use of craft. Without feminist artists opening the door for contemporary artists to use craft method in high art, I don't think that my work would be legible to many people. And then also this idea that you can transform your material conditions through representing your desire, that's a foundational idea in the project and the way I was taught about feminist practice." 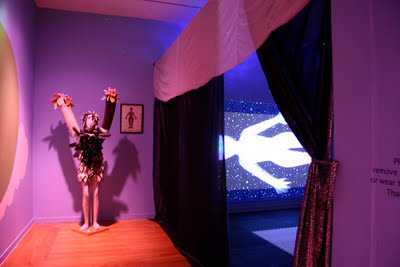 "The reason it was a utopian project was because we were reacting against the way the ISP [Whitney Independent Study Program] was thinking about approaches to art making. It was so critical, it was so distopian in some way. That you look at the world and you critique it and by critiquing it you can somehow understand it better. I don't think that's a problematic system or method, but I thought that wasn't the method I wanted to use. I wanted a more generative -- well what are the possibilities, what are the permutations of the possible."

"’The Land of the Pleasure Machines’ is actually where ‘No Place’ gets generated. So between the present and the future of the future there is the Land of the Pleasure Machines. So the idea is that even though the Empathics are attempting to get to a utopian place, they end up conjuring and connecting with a dystopia. I call it a dystopia because people have given up their flesh bodies to consume. But they're actually generating this utopian place within their own society. So although this society as it is is dystopian their drives end up being somewhat utopian as well."

Saya Woolfalk "The Institute for the Analysis of Empathy," Tufts University Art Gallery, 40R Talbot Ave., Medford, Massachusetts, Jan. 21 to April 4, 2010. She performs at the gallery at noon on April 2.

Portrait of Woolfalk at top by The New England Journal of Aesthetic Research. Behind her you can see, from left, the "Ancestor" sculpture/costume (2005), the "Fruit" sculpture (2010), and the No Placean "Skeleton" (2010) sculpture on the glowing platform. The next image is an excerpt from Woolfalk and Rachel Lears's video "Ethnography of No Place." At bottom is a photo of, from left, the "Self/Landscape" (2008) sculpture, "Energy Flows" drawing (2009), and a glimpse into the "Empathic Dream Box" video installation (2010).