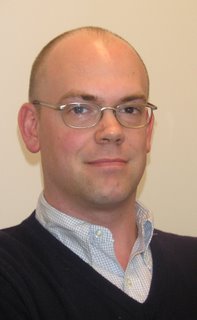 Bennett Simpson, associate curator at Boston’s Institute of Contemporary Art, is leaving to become an associate curator at The Museum of Contemporary Art in Los Angeles, beginning April 3. According to LA MOCA (the ICA has been, uh, unresponsive), during Simpson’s three years at the ICA he curated four “Momentum” exhibits, including the current Sergio Vega show and Paul Chan’s 2005 digital animation installation "1st Light," which was subsequently included in the 2006 Whitney Biennial and is now part of the ICA’s budding permanent collection. And he’s been organizing the major mid-career survey of photographer Philip-Lorca diCorcia that the ICA has scheduled to open on June 1.

Here’s video of Simpson leading a tour of the new ICA. (Photo above by Jen Mergel.)

This is a huge shame. Bennett does great things at the ICA!