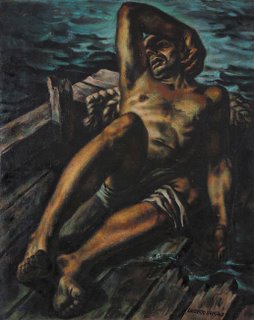 During World War II, Gloucester artist Umberto Romano painted a merchant marine adrift on a raft after Axis forces sunk his ship. In "Cargo" (left), the nearly naked fellow is contorted under a relentless sun, resembling a pieta or one of the poor wretches in Theodore Gericault’s early 19th century masterpiece “The Raft of the Medusa”

“Can one go on painting serene, calm, undisturbed, unemotional paintings, in such turbulent, intensely chaotic times?” Romano lamented in the forward to an 1944 exhibition catalogue. “Turn on your radio. Glance at the screaming headlines. Throw open your windows and the air is dense, seething, throbbing with pain, sorrow, hatred; full of black, hateful passion.”

The Cape Ann Historical Museum’s survey, “Man Sings of Man: Umberto Romano, 1906-1982” through Jan. 31 shows that his work had long been dark and melancholic, but during the war and after it grew ever moreso. 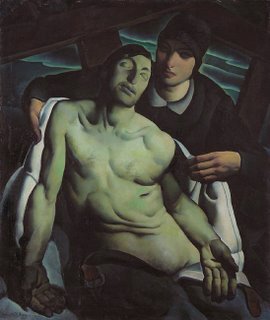 Romano was born outside Naples, Italy, in 1906, and immigrated to western Massachusetts as a boy. He studied at the National Academy of Design in New York during his teenage years before moving to Gloucester in 1933. There he offered art classes on a boat, before buying the Gallery–on-the-Moors, where he ran the Romano School of Art. During the ‘30s, he also taught art at the Worcester Art Museum school. He was commissioned to paint a mural at the Springfield post office in 1935 and a portrait of President Franklin Delano Roosevelt’s mom Sara.

“Him” (above), from about 1928, features a flapper-style Madonna in a cloche hat wrapping the dead body of her crucified son in a sheet. In a sultry self-portrait “Psyche and the Sculptor” (left), from about 1929, Romano paints himself in a skin-tight shirt, weight-lifter’s belt, scarf and beret. He holds a hammer near his crotch, a cocky symbol of his artistic and sexual prowess.

Romano adopts a cubist-flavored blocky style, with heavy black outlines, for his “New England Tragedy,” from about 1934. A guitarist serenades his lady friend over drinks in a cemetery, which has the vibe, if not quite the look , of the cemetery overlooking Lane’s Cove in Gloucester’s Lanesville neighborhood. Three women – apparently the Fates – loiter, watching in the background. The lady friend reclines among the tombstones, a bit of sexy bare thigh revealed between the top of her stocking and the hem of her skirt. You don’t need the fates to see where this is headed. 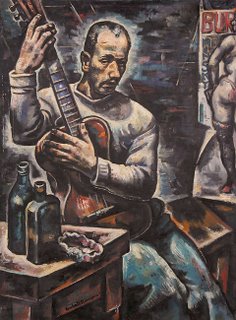 In “Man Sings of Man” (left), from around 1937, a sad-eyed fellow (seemingly another self-portrait) sits strumming a guitar behind a table with two empty bottles of booze and a lady’s garter. The clues suggest he’s all broken up over a burlesque dancer, maybe the girl in the poster on the back wall. It’s an overwrought melodrama.

The 1940s and the war bring a painting and drawing of a crucified woman-Christ and the drifting merchant marine. His 1950s “Great Men” series features a melting portrait of Picasso, a ghostly Rembrandt (below), a turbulent Van Gogh. “Lincoln Weeps” (c. 1950) is a black-outlined portrait of the great president feeling your pain. “Behold Man” (c. 1951) depicts a gaunt, scourged Christ holding a staff topped with a jester’s head. Romano renders the figure in jagged black, like a woodcut, with an abstract color background. It's a parade of tormented souls.

These aren’t great paintings, but they have a campy charm, like the illustrated covers of pulp novels. The style of Romano's work from, say, the mid-1930s onward falls under the general umbrella of Boston Expressionism – or the mass of artists across the country who stuck with realism seasoned by expressionist stylings despite the American modernist avant-garde’s headlong rush into abstraction. Here is the sidetrack so many local artists took. Now at the end of modernism and freed from its with-us-or-against-us ideology, we can look back at the other side with fondness and bemusement.

When Roman does go more abstract though, around the time that he left Gloucester for Provincetown in 1965, with ‘60s loopy line drawings of naked ladies and ‘70s disintegrating bodies, it feels forced.