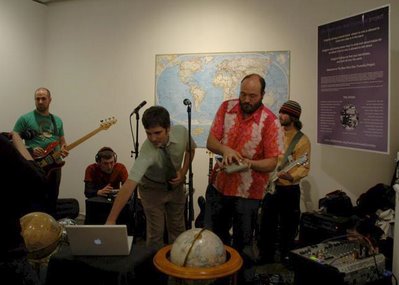 The opening a month ago of Axiom’s first show after moving from Cambridge into the former Green Street Gallery in a Jamaica Plain T Station was wall to wall people. And everyone seemed to be photographing or videoing everyone else like some crazy surveillance feedback loop. The draw was a six-person exhibit, “iArt,” of works made for iPods – but presented live or on monitors or projected too.

About a half-dozen members of John Herman’s “The Man Who Was Thursday” band (above) performed live – with some more joining in via the Net. Herman rounded up his collaborators on the Internet so this was the first time they met in person, though they’d already worked together on an album. The premise, as he explains on his website, is “Imagine joining a secret band where no one is allowed to know who else is in the band. Imagine only having seven days to write and record tracks for an album that no one is allowed to talk about. Imagine finding out that your bandmates are from all over the world. Welcome to The Man Who Was Thursday Project.” A friend who went with me liked the premise, but quipped that their electronicy jamming performance sounded just like a band that has only met on the Internet. 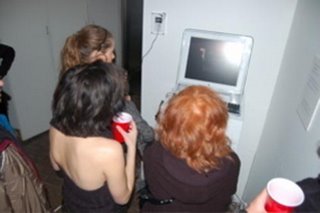 Bebe Beard’s “Gestures” presented some sort of visual iPod-style shuffle of projected images of student design models (examples were stuck to the walls) that had a warmed-over Russian constructivist feel. There was apparently a chirpy electronic soundtrack by Lou Cohen to go with it, but the imagery was so dispiriting that I couldn’t get myself to put on the earphones. Ravi Jain’s “Drivetime” (above) is a casually witty video-blog – imagine a homemade talk show – that he hosts from inside his car while driving around Boston. But like a lot of film and video stuff, standing staring at a little monitor in a gallery is not the ideal viewing experience. 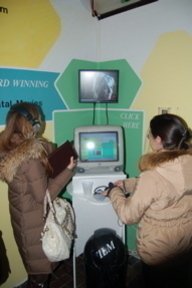 Former Guiding Light actress Lynne Adams presented some sort of survey and vlog about filmmaking (left). Too much of the show felt too caught up in techno geegaws and not concerned enough about saying something with them – which kept me from delving in much more.

I think new media art – all this stuff made with computer algorithms and video and iPods and Internets – is one of things that distinguishes the Boston art scene right now. And “iArt” and Axiom’s last show in Cambridge, “Interactive Cake,” have featured smartish curatorial premises, but, like Herman’s band, the result hasn't been as fun or inventive as the ideas sound when you first hear them.