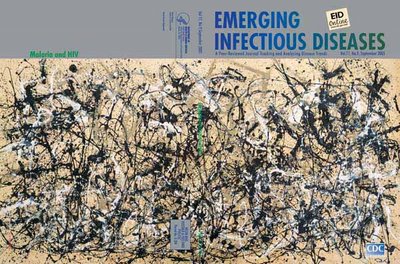 The folks organizing the “Pollock Matters” exhibit, scheduled to open at Boston College’s McMullen Museum on Sept. 1, report that Boston’s Museum of Fine Arts is also “conducting scientific research” on four of the now infamous disputed “Jackson Pollock” paintings, which I wrote about here. The show is expected to present 25 of them.

The MFA examination of these “Pollocks” is apparently focused on increasing “understanding of the place of scientific research in the art world. … The research is for scholarly purposes and not for the authentication of the works.” Results are scheduled to be released in September as part of the BC show.

Monday, Harvard researchers released their findings (the link includes some of the images) on three of the 32 paintings attributed to Jackson Pollock that Alex Matter says he found in his late father’s Long Island storage building in 2002. As I explained in Thursday’s Boston Phoenix:

The Harvard team compared the materials in three paintings to their patent dates. The first used brown paint “developed in the early 1980s.” The second was made with paint “most likely not available until 1962 or 1963.” The third used orange paint “not available until 1971.” Unfortunately, Pollock died when he crashed his convertible near his Long Island home in 1956.

Ellen Landau, who’s a key organizer of the BC show and affiliated with Alex Matter, attributed Matter’s cache of paintings to Pollock before Harvard released its results – and hasn’t backed off.

Landau is a bigwig Pollock scholar and former member of the Pollock-Krasner Foundation’s Pollock authentication board, which broke up about a decade ago. “If someone other than Pollock did do these paintings, he or she had an amazing knowledge of Pollock's working methods,” Landau argues. “This includes knowing exactly how Pollock made corrections as he went along (information not publicly available until the MoMA conservators reports published it in 1999).” I’m not sure how this is supposed to establish them as genuine since the paintings didn’t turn up until 2002, according to Matter’s claim.

Landau notes that Harvard dates the cardboard the paintings were done on to Pollock’s lifetime. Another piece of evidence she cites is a photo (provided to the Harvard team) of the brown paper wrapper that Alex Matter says he found the paintings in. It’s inscribed: “Pollock (1946–49) / Tudor City (1940–1949) / 32 Jackson experimental / works (gift & purchase) / Bad condition. / 4 both sides. All / drawing boards. / Robi paints. / MacDougal Alley, 1958.” Landau says a handwriting expert says this writing “is [Alex’s father] Herbert Matter’s handwriting.”

The crux of Landau’s argument seems to be that Harvard focused on North American patents – but the paint in these paintings may have come from Matter’s brother-in-law Robert (Robi) Rebetez, who ran an art supply shop in Switzerland. “We are planning to do further research in Switzerland on patent dates for pigments there,” Landau writes. “Just because a pigment wasn't patented in the USA, doesn't mean that it was not available in Switzerland or Germany. We don't know the answer to that yet.”

Tuesday, I asked Harvard conservation scientist Narayan Khandekar what patents he and his colleagues used to date the paintings and he said they looked at patents in the U.S., Canada and, uh, somewhere else that he couldn't remember right then. (Other projects have kept me from following up.) But assuming the Harvard folks didn’t check European patents, what we’re being asked to believe is that paints (pigments, binding media) were available in Europe 9, 18, even 27 years before they were patented in North America. This isn’t my area of expertise, but was there really that much of a patent lag?


Above: Jackson Pollock’s “Autumn Rhythm (No. 30)” (1950), from the collection of New York’s Metropolitan Museum of Art, as it appeared on the cover of the September 2005 issue of the U.S. Centers for Disease Control’s journal Emerging Infectious Diseases. I just love this pairing: Pollock art = disease.