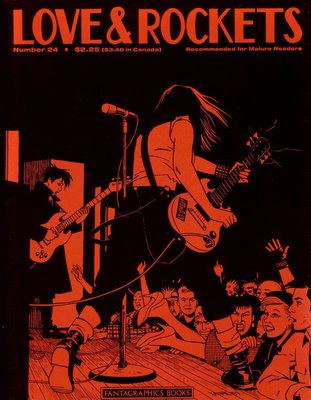 I spoke to Los Angeles cartoonist Jaime Hernandez at the opening Monday night of the exhibit “Sex, Love & Rockets” at Brown University. (I reviewed the show here.) Jaime and his brother Gilbert are the creators of the great, long-running comic “Love & Rockets.” Here’s a couple outtakes from the interview:

On his 2006 comic serialized in The New York Times Magazine:
“That was a learning experience. This was the first time that I had to deal with a million readers instead of a thousand. First off, I got really intimidated. What will they want to see? … And then I said, ‘Fuck that, I can’t give them that. They want me, I’ll give them me.’ But I still couldn’t get it out of my head that I was doing it for a million people who didn’t read comics.” On top of that Times style restrictions meant he couldn’t cuss in the comics – which is a key aspect of his characters. “I had to think of a character to use that wouldn’t cuss so much so it wouldn’t seem so strange.”

What is it like to still be doing this comic, to still be working with these characters after 25 years?
“It’s kind of tough, but I try to let them grow alongside me.” He sometimes wishes he’d had his characters have kids, families (“Gilbert handled that very well”), but it never quite felt right for his characters, and he didn’t know how to integrate it well into the strip. And now it seems too late. “I wanted Maggie to have a kid, but I’ve got to wonder, she’s in her early 40s now. Where does that leave her? Maybe she’ll try. I just know in the past when a character has a kid that character is over.”