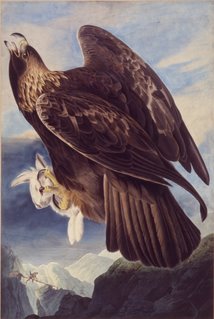 The great ornithologist and artist John James Audubon was staying in Boston on Feb. 24, 1833, when he called on Ethan Allen Greenwood at his Columbian Museum. Greenwood asked Audubon to help him identify a live eagle he’d purchased from a man who hunted fox with spring-traps in New Hampshire’s White Mountains.

As Audubon recounted the tale in his 1835 “Ornithological Biography” (I recently read it in the rare book room at the Boston Public Library): “One morning the trap was missing but on searching for it, it was at last discovered more than a mile from its original place, and held the bird by one of its toes only. The eagle flew about through the woods for several hundred yards, but was at last with difficulty secured.”

Audubon coveted the golden eagle, a 3-foot-long female with a 7-foot wingspan. He convinced Greenwood to sell it to him and set off home with the cage under a blanket, planning to draw it for what would become his landmark volumes of etchings, “The Birds of America.”

The 47-year-old Audubon had been living in Boston since the previous summer. The city, his wife Lucy wrote to a friend, “is a more interesting place than any I have seen in the United States, and where we met with a most cordial welcome and obtained eight subscribers to our work [‘The Birds of America’].” Audubon exhibited sketches at the Boston Athenaeum in August and then headed up to Maine and New Brunswick looking for seabirds to sketch. By October, he was back in Boston.

“I must acknowledge that as I watched his eye, and observed his looks of proud disdain, I felt towards him not so generously as I ought to have done,” Audubon wrote of the golden eagle. “At times I was half inclined to restore to him his freedom, that he might return to his native mountains; nay, I several times thought how pleasing it would be to see him spread out his broad wings and sail away towards the rocks of his wild haunts; but then, reader, some one seemed to whisper that I ought to take the portrait of the magnificent bird; and I abandoned the more generous design of setting him at liberty, for the express purpose of shewing you his semblance.”

Audubon spent a day watching the caged bird, the next considering how to depict it, and the following day mulling “how I could take away his life with the least pain to him.” On the recommendation of a friend, Audubon concluded that the easiest method for himself and the least painful for the bird would be to asphyxiate it with smoke. So he shut the bird up in a small room, sealed with blankets, and a pan of burning charcoal.

“I waited, expecting every moment to hear him fall down from his perch; but after listening for hours I opened the door, raised the blankets, and peeped under them amidst a mass of suffocating fumes,” Audubon wrote. “There stood the Eagle on his perch, with his bright unflinching eye turned towards me, and as lively and vigorous as ever!”
Audubon shut the bird in again. When he checked in at midnight, “he was still uninjured, although the air of the closet was insupportable to my son and myself.”

Undaunted, Audubon started the charcoal burning again the next morning, but this time added sulfur. “We were nearly driven from our home in a few hours by the stifling vapours,” Audubon wrote, “while the noble bird continued to stand erect, and to look defiance at us whenever we approached his position of martyrdom. His fierce demeanour precluded all internal inspection, and at last I was compelled to resort to a method always used as the last expedient, a most effectual one. I thrust a long pointed piece of steel through his heart, when my proud prisoner instantly fell dead, without even ruffling a feather.”

Audubon arranged the bird as he had planned for his painting, with its wings curled back as if chugging into the air, and toiled for about 60 hours or two weeks, depending on when he recounted the story. “I sat up nearly the whole of another night to sketch him,” Audubon reported, “and worked so constantly at the drawing that it nearly cost me my life. I was suddenly seized with a spasmodic affection, that much alarmed my family, and completely prostrated me for some days.”

The stroke, Audubon wrote to a doctor friend, “seized on my mouth & particularly my lips, so much so that I neither could articulate or hold anything. My good dear wife was terribly frightened, and yet acted so promptly with prudence & knowledge that I was relieved, as I already said, in about one hour.” By April, he was well enough to take Lucy to New York and plan a Labrador expedition, for which he set off in May.

In Audubon’s watercolor, the proud brown raptor flaps into the sky above icy mountain peaks with a white hare pinched between its talons. For the background, Audubon invented a tiny hunter (believed to be a self-portrait) shimmying across a log spanning an icy ravine, with his rifle and a dead eagle slung on his back.