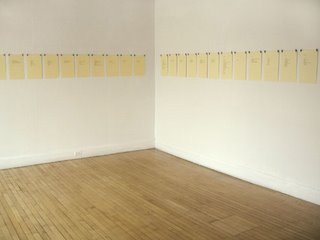 Congratulations to Cambridge artist Kelley Sherman for being named winner today of the Boston Institute of Contemporary Art’s 2006 Foster Prize (formerly known as the ICA Prize), which honors “a Boston-area artist of exceptional promise” with $25,000.

In past years, the ICA has just exhibited the work of the winner, but when the museum opened in its new building last December it mounted a show of four finalists for the 2006 prize, hoping that taking the competition public would generate greater interest in the show. Some lament it being turned into public game show (the finalists in particular, I believe), but I think it’s fun, especially all the debating and grousing it inspires.

Since December, I’ve been trying to game out whom the ICA judges would pick for the winner – but I’ve been too chicken to share my thinking. But now that the winner has been announced, I’ll blithely blunder into public with my harebrained theories:

The previous six ICA Prize winners have split 50-50 between bright handmade painting and ultra-serious, cold, conceptual stuff. But the ICA’s taste generally leans toward the cold and conceptual, so I figured Sheila Gallagher didn’t have much of a chance for the very reason her work (flowers and waterfalls) leads the visitor polling: it’s too lovely. Jane Marsching’s arctic explorer jokes fall flat, but I thought her environmentalism and new media stuff (blog as forum) could swing judges.

If it was just about aesthetics, though, I thought the rigor and purity of Rachel Perry Welty’s twist-tie sculptures might win out. But her “Karaoke Wrong Number” video had people laughing (and second in visitor polling) – probably not a good thing. 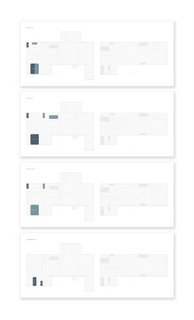 Sherman’s print-outs of anonymous wish lists from the Internet (at top, “Wish Lists,” 2006) and floor charts documenting a divorce (at left, “The Family House,” 2006) could be seen as even more aesthetically rigorous and pure than Welty’s work, which I suspect helped her be named “Breakout artist of 2006” by Big, Red & Shiny (a marker of where the local art intelligentsia is leaning).

In retrospect, is it any wonder that the ICA's prize went to the artist who most favored words and diagrams over sensual pleasures?

“Kelly Sherman’s work is a captivating mix of the conceptual and the emotional,” ICA Director Jill Medvedow says in the press release. “Like so many exceptional artists, she helps us to see the familiar in entirely new ways. Through her eyes, anonymous wish lists and floor plans become an incredibly poignant and engaging examination of human desires and connections.”

In all the hubbub over the ICA’s new building, the Foster Prize show has been pretty much ignored by local critics. (Admittedly, I’ve not written about the show in depth yet either – but I’m getting to it.) Perhaps, the announcing of the award will give people (like me) a kick in the pants to actually engage the show. It’s up through March 11.