One of the great karmic justices of recent years is the growing fame and influence of the Fluxists, the long obscure band of 1960s philosophical jokers. They’re the focus of a cool show at Harvard right now called “Multiple Strategies: Beuys, Maciunas, Fluxus,” which I review here. 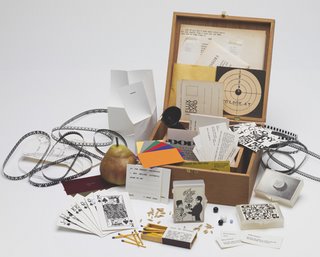 One of my favorite pieces at Harvard is Ben Vautier’s wicked antiestablishment joke “Total Art Matchbox,” a box of matches labeled (I’ve retained his spelling): “Use these matchs to destroy all art – museums art library’s – ready-mades pop-art and as I Ben signed everything work of art – burn – anything – keep last match for this match[box].”

Shown here are, at top, a box of various Fluxus puzzles, films, toys and trinkets – including Vautier's matchbox in the foreground – organized by George Maciunas for the “Flux Year Box 2” (late 1960s) and, below, Ay-O’s “Finger Boxes” (1964), which are filled with foam or feathers that one could finger if the boxes weren’t safely secured in museum vitrines. 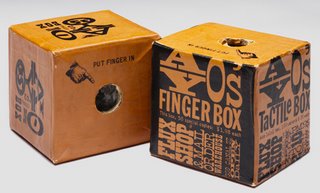 The influence of this stuff is apparent locally in The Institute for Infinitely Small Things (right down to George Maciunas’ 1966 “Fluxworker Lab Coat”), Harvey Loves Harvey, and Andrew Mowbray’s 2005 performance “Just for Men” at the Boston Center for the Arts.

There’s a bunch of Fluxus video and audio on the Web (though I can’t vouch for all its authenticity). Check out: