Mitch Epstein in ‘Shoot the Family’ 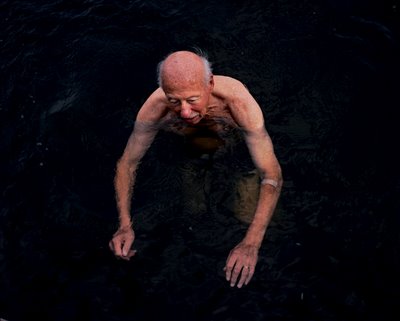 “Shoot the Family,” a traveling show of avant-garde family photos organized by Independent Curators International, closes tomorrow at MassArt. Among the 16 photographers is New Yorker Mitch Epstein who returned to his hometown of Holyoke, Massachusetts, to document the demise of his father’s furniture store in 1999.

Epstein’s “Family Business” project is represented here by a pair of photos – his old man swimming, a briefcase on a bare mattress – and a video mixing images of his parents’ 50th wedding anniversary with footage of his father marking prices on items for a final sale at his shop.

The large color 2002 photo “Dad, Hampton Ponds III” (above) shows his father, after suffering a stroke, swimming in a pond. It’s shot from above, showing his bald head, his scrawny arms stretched forward. It’s a good photo, not great. But the water – clear and cool and bottomlessly black – is lovely. And Epstein notices the detail of the Band-Aid on his father’s left forearm, which somehow symbolizes all the old man’s frailty for me.