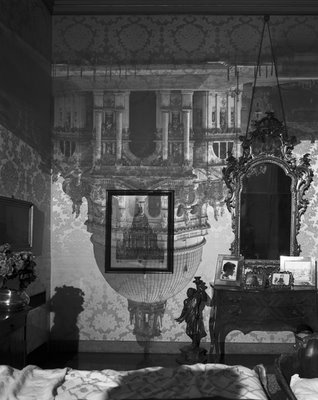 Abelardo Morell of Brookline has a show up at Danziger Projects in New York that the gallery proclaims to be his first New York exhibit devoted exclusively to his camera obscura photos of the past 15 years. As a group, the photos are a record of Morell’s travels during that time – Havana, London, New York, San Francisco, Florence, the Grand Tetons. But these pictures are best seen one by one, rather than in a bunch like this. You need the time to drink them in without distraction.

Morell seals up rooms of houses, offices and hotels and turns them into giant pinhole cameras, with the scenery outside seeping into the room through a hole, upside-down. You have to marvel at Morell’s ability to find rooms with just the right views. Then he sets up a camera inside the room to photograph the outside scene projected atop the inside scene in black and white. They’re generally shot with extremely long exposures, eight hours at a pop.

If you’ve followed Morell’s work at all a number of these photos will be familiar – like the 1991 shot of the houses of his neighbors across the street projected onto his living room wall, which remains a wonder, a neat-o photographic trick and at the same time a rumination on the relationships in neighborhoods.

But there’s also a pair of new photos from last year. 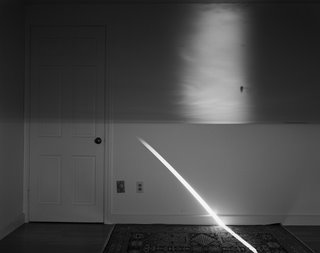 “Sunrise Over Atlantic, Rockport, MA, July 14, 2006, 5:20-7:05 AM” (at left) depicts a plain room, looking head-on at a wall, a door, electrical outlets, a rug. The upper half of the wall is covered with the upside-down image of the polished steel Atlantic Ocean outside. And just to the right of the doorknob, the rising sun scorches a white diagonal down the wall, over the molding and across the floor. This photo, like much of Morell’s work, is about the basics of light, looking and optics – but here the image is too plain for my taste.

But check out “Santa Maria della Salute in Palazzo Bedroom, Venice, Italy” (at top). It shows a lavishly furnished bedroom, with floral-patterned wallpaper, an ornate framed mirror atop a vanity, and a disheveled bed. On the wall is a framed print of the landmark church. And then – wow – the image of the church itself appears upside-down on the wall, swallowing up the print, big and awesome like the shark in the poster for “Jaws.” But, you know, not menacing like a shark, more like a stately leviathan.

It’s such a neat pairing – a photo of the image of the church projected atop another image of the church – like mirrors within mirrors. And it speaks to the memory of the place – or rather the place’s memory. Morell’s best camera obscura photos always seem to be about the walls speaking about what they’ve witnessed, whispering about their long, patient looking.

By the by: Allie Humenuk’s documentary about Morell, “Shadow of the House,” has its world premiere at the Boston Independent Film Festival at 7:45 p.m., Saturday, April 28, at the Coolidge Corner Theater.