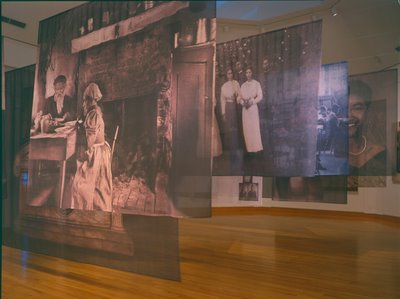 Here’s my review of “The Hampton Project” by Carrie Mae Weems of Syracuse, New York, at Williams College Museum of Art. I tried to put it in the context of a number of other shows happening right now:

In the late 1980s and early '90s, concerns with personal identity, race, gender, and sexuality (think AIDS) were all the rage in the art world, and a group of black women working this territory, including Weems, Lorna Simpson, and Brookline's Maria Magdalena Campos-Pons, first gained notice. Though these artists continued to produce strong work, the white-hot spotlight of the art world eventually moved elsewhere. But we're in the midst of a reassessment of this socially concerned style now, with retrospectives of Campos-Pons at the Indianapolis Museum of Art, Simpson at New York's Whitney Museum, and Kara Walker at Minneapolis's Walker Art Center. (Walker also has a small show at Andover's Addison Gallery of American Art. )

One could also mention the feminist art shows – LA MoCA’s “Wack!” and the Brooklyn Museum’s exhibitions “Global Feminisms” (which comes to Wellesley College’s Davis Museum in September) and Judy Chicago’s “The Dinner Party.”

It seems to me that 9/11, Iraq, and the drowning of New Orleans have put us in a serious mood. And so we're ready again to consider the old uncomfortable questions about race, gender, and sexuality.

But maybe it’s just one of those cyclical things.

Note: There’s an error (my fault) in the Weems review. I wrote that “Weems visited Hampton, selecting old photos from the university's archive to scan and print on diaphanous muslin banners that hang from the Williams College gallery ceiling.” That's true as far as it goes, but some of the images Weems uses came from elsewhere. 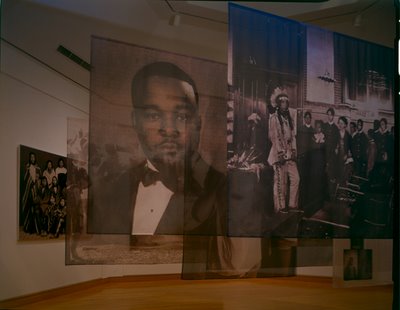