Second Gallery to close in July 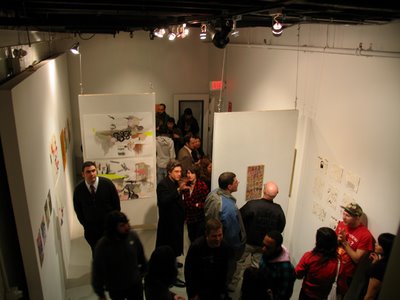 Rebecca Gordon, the director of Second Gallery in South Boston, plans to close the gallery this summer and head west to study art-making and art criticism at the School of the Art Institute of Chicago. This sounds like a good move for Gordon, but sad news for the Boston art scene as the gallery had quickly become one of the most interesting exhibition spaces in town.

Gordon, who is 23, grew up around Boston, graduated from Hampshire College in Amherst in 2005, moved back to Boston that September, and opened the gallery in the Distillery building in South Boston, which is owned by her family, at the end of January 2006. (The photos above and below depict past openings.)

The gallery has featured a bunch of cool weird shit, including work by Paper Rad, Liz Nofziger, Saya Woolfalk and Eric Shaw. The current show, “Personal Computer,” brings together three artists to succinctly and elegantly cover the trend of people taking apart familiar websites and rejiggering their components into web-based art. As I wrote in this week’s Phoenix: "It leads me to wax philosophical about how we interface with the Web, about all the computer detritus that we take for granted."

Two more shows are planned before Second Gallery closes in July. And Gordon plans to publish a book on the gallery’s 12 shows with a retrospective essay about her experience running the gallery.

In an intriguing move, Gordon hopes to find someone else to start his or her own gallery in the space – rent free – beginning this fall. She writes:

I seek a curator, gallery, project space, or alternative business to move into the space that Second Gallery currently occupies and not pay rent. Second Street Associates, the company that funds Second Gallery cannot continue to fund the operations of the establishment, but they will donate the space. So, this could be the perfect opportunity for someone or something that has its own source of funding or has a sustainable business model to operate out of a wonderful free space in the best art building in Boston, The Distillery. The new thing could be here for a year or indefinitely into the future if it is working out. The space is commercially zoned, and so it is legal to do business out of the space. It would not keep the Second Gallery name, but would be announced and introduced in Second Gallery's last press release. I would also give the new thing my mailing lists and press contacts.

The only requirement for this opportunity would be that the space would continue with Second Gallery's founding mission of exhibiting and making available new experimental work with a good representation of installation and video art and a supportive attitude toward emerging artists.

It occurred to me that people without a ton of funds would think it would be impossible, but actually, at the rate that Second Gallery spends, it can cost less than 6,000 dollars to operate the space for a whole year.

Contact her here if you’ve got a good idea. 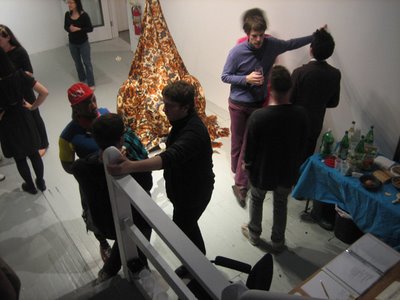