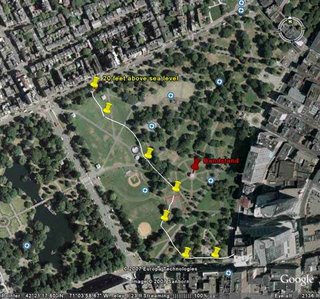 Global warming is the hot subject in art these days – and I can’t help being fascinated by what one might call the performance art part of the big “One Earth, One Climate” Global Warming protest planned for Boston Common from 1:30 to 4 p.m. Saturday, April 14.

It begins at 1:30 p.m. with people – snorkels, life jackets and water rings are encouraged – forming a human chain across Boston Common along a line 20 feet higher than the current sea level, where the Atlantic could reach if polar and glacial melting continues unabated. (There will also be music and speeches by politicians, scientists, ecologists and such.)

There’s a growing body of art that imagines our communities flooded by global warming – see Providence’s Brian Chippendale’s 2005 screenprint “Providence 2047” and the 2004 film “The Day After Tomorrow.” But Saturday’s action takes it a step further by putting people on the very spot where the waterfront may end up. A simple, brilliant, moving idea.

And it’s a much more memorable cross of activist action and art than the Greenpeace global warming rally in Florida last November in which people laid down in a park to create a design that was photographed from the air.

The Boston event, organized by Step It Up Boston, Boston Climate Action Network, the Urban Ecology Institute and the Union of Concerned Scientists, is part of rallies across the country aimed at bringing attention to global climate change and getting Congress to pass legislation requiring an 80 percent reduction of greenhouse gas emissions by 2050.