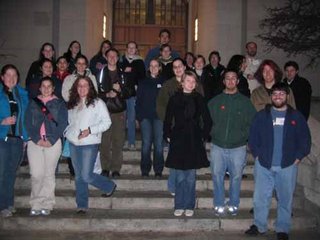 Monday night 28 people – mostly Boston University students – gathered outside BU’s College of Arts and Sciences for a vigil (shown in photo above) marking the fourth anniversary of the looting of Iraq's National Museum in Baghdad, according to an organizer, Matt Piscitelli.

In early April 2003, as American forces seized Baghdad, the museum was being looted, with thieves making off with thousands of artifacts, the legacy of ancient Mesopotamia, with some items dating back 3,000 years before Christ. A September 2003 Marine Corps report put the loss at more than 10,000 items.

Monday's vigil was organized by students affiliated with the BU Archaeology Club and was part of three nights of vigils across North America spurred by the New Jersey-based group Saving Antiquities For Everyone, which hoped to bring attention to the artifacts still missing from the museum – more than 7,000, by its count – and ongoing antiquities looting in Iraq. 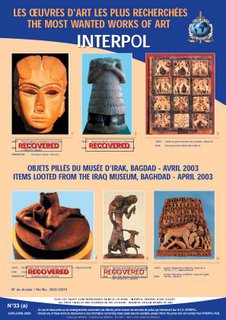 The looting of the Baghdad museum was one early sign of the failure of American and coalition forces to secure the country after they seized it. At the time, then US Secretary of Defense Donald Rumsfeld brushed aside concerns, declaring: “Stuff happens.”

"Freedom's untidy, and free people are free to make mistakes and commit crimes and do bad things," Rumsfeld said on April 11, 2003. "They're also free to live their lives and do wonderful things, and that's what's going to happen here."

It wasn’t just history that was disappearing, looters also ransacked hospitals and stockpiles of weapons. It’s those loose weapons that insurgents have turned into jerry-rigged bombs that have killed hundreds of American soldiers and thousands of Iraqis.

Vigil organizers here were careful to focus on the loss of antiquities rather than the war or American culpability – which would have made it more difficult to get permission to hold the event at BU.

Looting is a big deal in the art world these days, from Nazi thefts to the looting of antiquities. Museums (including Boston’s Museum of Fine Arts) and collectors have been embroiled in disputes over ancient objects they have but nations like Italy argue are rightfully theirs.

But at the dirt level, Piscitelli says, much antiquities looting is driven by poverty. “If you tackle these humanitarian issues,” he says, “that’s how you deal with looting.”