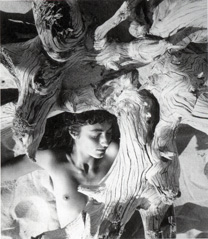 The main focus of the BC exhibit “Pollock Matters” is the relationship between Jackson Pollock and the photographer and graphic designer Herbert Matters. But what about Pollock's relationship with Herbert’s wife, Mercedes?

In her catalogue essay, Ellen Landau says on page 20 that Pollock had a copy of Herbert Matter’s sexy surreal 1940 photo “Driftwood II (Mercedes Provincetown),” which remains in the flat file storage drawers at Pollock’s Long Island barn studio. It shows Mercedes, eyes closed and topless, laying on the Provincetown beach sand, underneath a tangle of driftwood. Landau’s mention of the photo hints at – but then bypasses – the attraction between Pollock and Mercedes Matter that was reported in Steven Naifeh and Gregory White Smith’s 1989 biography “Jackson Pollock: American Saga.”

was already brooding over rumors (baseless) that Jackson was having an affair with Mercedes Matter or Vita Peterson, or both, during the summer of 1948. … Both Peter Petersen and Herbert Matter were gone for much of the summer, and Lee spent at least one day every week in town visiting Dr. Hubbard. Lee also knew her old friend Mercedes’s reputation for ‘wanting to taste everything, smell everything, try everything’ [according to May Rosenberg]. Besides, says Fritz Bultman, ‘Vita and Mercedes were glorious, gorgeous young women – which you certainly couldn’t say about Lee at the time.’ Flattered by Lee’s suspicions, Jackson took a perverse pleasure in encouraging them. At a dinner party, in Lee’s view, he would grab a woman and proclaim loudly, ‘I love all women,’ May Rosenberg recalls. ‘It was like he was playing a game with Lee, only she didn’t see it was a game.’ Other times, late at night, he would stand outside neighbors’ windows – when the husbands were away – and scream sexual threats.

Naifeh and Smith write on page 637 of weekend dances held by The Club, an artists’ discussion and socializing group that Pollock began visiting in 1949:

Mercedes Matter, the only woman among the Club’s early members, was one of those who gave the dances a sharp edge of sexuality. … The teeming sexuality, the sideline bragging of other artists about “all the women they had ‘stuck,’” and the flirtatious attentions of Mercedes Matter and others only pushed him [Pollock] further into his shell.

By the mid 1950s, Pollock and Krasner’s marriage was breaking down, his health deteriorated and his drinking got worse and worse. On page 770, Naifeh and Smith say:

Frustrated in the real world, Jackson turned increasingly to fantasy. He bragged to [his biographer] B. H. Friedman that he had "fucked Rita Benton." With others, he added Mercedes Matter and Vita Peterson to the list of fictitious conquests.

Naifeh and Smith stress on page 879 that:

Vita Peterson who claims that [Jackson Pollocks] and Mercedes were "highly attracted to one another," says they never had an affair: "I asked her and she said not." Esteban Vicente, another confident of Matter, also denies any affair. Herbert Matter: "I think Jackson was quite attracted to Mercedes but there was never the slightest thing between them … that’s my feeling."