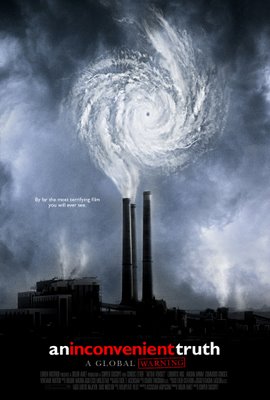 Al Gore is the co-winner of the 2007 Nobel Peace Prize for his efforts to bring attention to the threat of global warming and “lay the foundations for the measures that are needed to counteract such change,” the Norwegian Nobel Prize Committee announced today. Gore, who shares the prize with the United Nation’s Intergovernmental Panel on Climate Change, is clearly the single most important figure for bringing attention to global warming, and a significant part of his effort was a work of art. 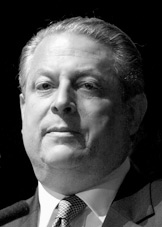 The turning point was his landmark 2006 documentary film “An Inconvenient Truth.” Certainly news of global warming had been dribbling out for years, but Gore’s work of art summarized and framed the issue in a way that helped millions understand its significance, many for the first time. The public awareness and worry this produced has been a driving force in focusing government and private efforts around the issue. It’s primarily Gore’s film that the Nobel Committee is talking about when it says, “He is probably the single individual who has done most to create greater worldwide understanding of the measures that need to be adopted.” Note how it functioned: in theaters, on DVDs, in public, outside the fine art world. This is the example that proves those who say political art is ineffective wrong.

In my survey of global-warming art in June, I wrote:

The most prominent example of global-warming art is, of course, Al Gore’s 2006 documentary film “An Inconvenient Truth,” which has to be judged as one of the most significant examples of political art of the past century, up there with Upton Sinclair’s novel “The Jungle” and Rachel Carson’s non-fiction book “Silent Spring,” for its success in bringing public attention to the problem of global climate change. (I’m using the term “art” broadly to describe any creative endeavor, from painting to journalism to boat building.) Along with Elizabeth Kolbert’s reports on global warming that began appearing in the New Yorker in 2005 and Jared Diamond’s 2004 book “Collapse,” a study of how societies mismanage their relationships with the environment, “An Inconvenient Truth” sparked much of the global-warming art now appearing in galleries and museums.

That trend continues. The Cambridge School of Weston is planning a global-warming art exhibit for November and Montserrat Gallery of Art in Beverly (full disclosure: where I’ll be speaking on Oct. 25) is planning an exhibit of green art for next year.


Some of my previous reports on global-warming art: