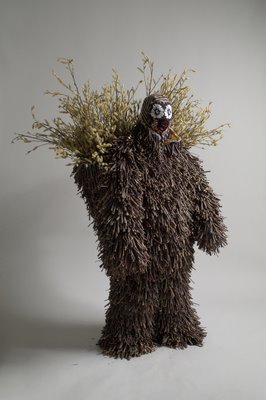 Chicago artist Nick Cave (no, not the musician) gives a free talk about his “Soundsuits” (pictured) at the RISD Auditorium at 6:15 Wednesday evening. He may also (keep your fingers crossed) perform.

art world reputation comes from his “Soundsuits,” lavish, strange, beautifully-crafted outfits resembling mash-ups of African tribal ceremonial dress, Ku Klux Klan robes, Roman Catholic clergy vestments, yetis, Star Wars aliens, plumed and sequined carnival costumes, and fabulous drag queen gowns. Locals might notice a resemblance to the monstery costumes of Providence’s Forcefield collective. … The name “Soundsuit” refers to how all the surface decoration jingles and rattles when worn. The costumes are charged by their contrasting associations: African versus white supremacist, religious versus pagan, straight male warrior versus gay peacock. But they’re more than the sum of their references. They tap deep archetypes that can make them feel awesome — in the old sense of quaking in the presence of mysterious ancient powers.

Below are (a bit out of order) excerpts from my recent telephone interview with Cave:

Cave: When the Rodney King incident happened. I was reading in the paper about how the police sort of brought description to him. You know they were talking about, I can’t remember exactly what it said, but they were talking about this big, black, male figure that was bigger than life, that was mammoth-like. And I just started thinking about these words that were describing this human being, and I was like, “This is just fucking insane to me.” And I realized at that point I needed to take a different responsibility, I need to recognize that this is the platform that I need to be delivering, to work on.

And my first “Soundsuit” was a twig-suit. Which I didn’t even know it was a “Soundsuit.” I was just sort of making a piece in response to that situation. So I gathered all these twigs in the park and made this suit. I wasn’t even thinking that I could get into it. That wasn’t even on my brain. And then I made it and then I put it on. And I was just like, “Oh. My. God.” And at that point I knew that I had, you know you just know when you’ve found it. And I just knew. And I thought, “Oh, God, am I ready to take on all of this right now.” Because I just knew that it was a sculpture, it was again this suit of armor, it was this sort very unfamiliar sort of territory that I wasn’t really quite sure what it meant. Still don’t know really. Then there was performance. So it’s all of these sort of things. In order to be heard, to have a voice, you need to be an activist. It was all of these things I was thinking about when I was in it. I could walk around in it and not really create a lot of gesture of movement. But then the moment I jumped in it, the clanging of those twigs against one another and this rustling sound. It just became this complete animated character. And so it was just like, “Shit, this is just a whole new direction.” That it’s powerful, loaded and threatening, all at the same time. And yet seductive.

…I don’t see myself as an artist first, I see myself as a humanitarian first. And what that means is that my art allows me to use it as a vehicle for change. And that really is what is important to me. I’m not really that interested in becoming an art star. As opposed to really sort of paying much more closer attention to my purpose in life and using my art as a vehicle to arrive there.

With my work, and particularly with the “Soundsuits,” for me it’s a combination of things. It’s really about bridging our differences together and meshing cultural references and cultural identities into this sort of global experience. It’s like, we can look at a “Soundsuit” and we may be able to talk about Turkish textiles, but yet the form of the suit may be pulled from a reference to Ku Klux Klan. It’s like bridging that with other references. And then we may be just swinging and talking about carnival in terms of maybe a surface application. So for me it’s like really allowing and yet it becomes its own identity, it becomes this foreign image or group of citizens that are of a new world. 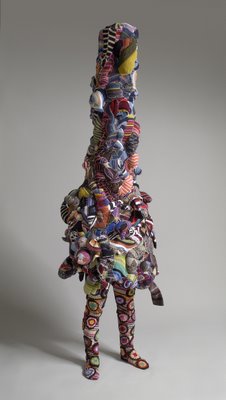 Cook: One of the things that strikes me is that mix of racial and cultural references, particularly when you go back and forth between stuff that references African tribal clothing versus Klan hoods. It’s weird. It’s uncomfortable.
Cave: It is uncomfortable. But at the same time there is some level of attraction. And that’s really where it’s on the fence. That’s where it gets really kind of disturbing, because for some reason it is seductive. But at the same time you’re like, “Hmm.” But at the same time you’re like too fascinated, captivated by that sort of power. I think we all have those elements or intentions within ourselves. It’s erotic, it’s sexual, it’s provocative, it’s all these things that just sort of get us fired up and hungry and eager to partake in something that is perhaps unfamiliar. I don’t know. It’s very weird.

Cook: Why is it important to have that mix of opposing forces, like the Klan and what it’s opposing?
Cave: It’s not all coming there. Let’s broaden it out, open it up a bit. I think a lot of it comes from me really looking at myself as a black male in society. And also looking at African-American history and being empowered by that. Being empowered by the ability of a group of people that prevailed through horrific circumstances and still coming out of that feeling, you know, fearless. I realized that I have so much fuel to pull from in terms of that part of my history. And that is really fascinating to me. And there’s so much material there that I don’t have to come, provide these speculations or these theories that don’t exist. It’s all there. I have a lot to draw from. That to me is seductive. I can sort of skirt the surface, I can layer it with maybe 15, 20 different meanings. I have the power to navigate it and allow it be a sort of blur. And yet we can completely come in and give focus, focus, focus and target, and speak about one specific thing if we want to.

…It’s male power, it’s masculinity, it’s feminity, it’s really just all of the above. I don’t have these issues about that with myself. I’m very much about the whole idea of exploring that aspect of myself and trying to find a way to be just whole.

You know it’s like when I walk out of this loft that I live in, at that particular point my identity erased. Which is interesting. One day I was coming home from teaching at the school and all of a sudden I was surrounded by I would say 10 undercover cops. I mean literally surrounded me in fucking cop cars. I had to lay on the damn ground. They then eventually had me get up and checking me over and identity and ID and all this kind of mess, because the convenience store was robbed down the street. I’m like, “What the fuck?” And so I realized at that point, my identity, when I leave the privacy of my home, it is completely erased. Which then also allowed me to think about my work in that way, on these levels of perception and perceived and assumptions and things of this sort.

Cook: In the “Soundsuits,” it’s all mixed up, but it’s also directly engaging those sort of signifiers. Also at the same time if you wear it you’re pretty much completely hidden inside, your identity is concealed and hidden, but it gives off this sort of suggestion of identity through its shape and decoration.
Cave: Is it about this sort of second skin? Is it about this suit of armor? Is it about protection? It is about all of those things. It is about me protecting myself against a world that is prejudiced. It’s me sort of protecting myself in a world that is prejudiced against homosexuality. It’s all of these sort of things. I’m not in the studio thinking about one solo aspect of my life. All of this shit is just sort of layered and complex. And I used to think about that a lot. I remember working in my studio maybe 20 years ago and I all of a sudden had this revelation like “What the fuck am I doing?” I need to be addressing everything that I’m thinking about as I’m in the process of making. And not separate and decide well this work is going to be about this. When I’m thinking about maybe my brother who is ill, at the same time I’m listening to NPR about some nuclear explosion. Just all of a sudden it came to me that I’ve got to come to a place of truth.

…I think about things. Can you imagine driving home from a bar at 3 in the morning down I95 and then all of a sudden there’s a “Soundsuit” running down the expressway. ‘What the hell?’ Just shit like that. Because I’m all about these happenings, just creating these sort of happenings here and there. My thing is what do you do with that information if you saw that? How would you describe a twig “Soundsuit” to someone the next morning? How do you bring description to that, and for someone to believe you, that you’re telling the truth. “Are you like fucking crazy?”

Cook: Have you worn the “Soundsuits” on the highway?
Cave: Well, not exactly there. I’ve had encounters with intersections with maybe 20 “Soundsuits.” We just sort of enter an intersection, in the street, and just sort of stop traffic, maybe for about seven minutes, and then we just disperse. Here in Chicago. I’m always doing shit like that.