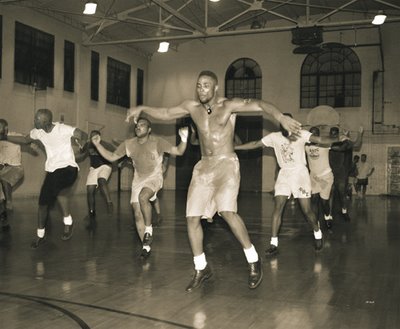 Here’s an excerpt from my review of Providence photographer Kerry Stuart Coppin’s exhibit “Between Me and the Other World” at Rhode Island College’s Bannister Gallery:

In Kerry Stuart Coppin’s 1991 photo “Black Men Learning to Fly,” rows of young black men hop and pump their arms in what at first looks like an aerobics class inside a gymnasium. The men wear sweat-drenched T-shirts and shorts. Then you notice their dress shoes. It turns out they’re members of a fraternity at the University of Maryland at College Park (where Coppin then taught) rehearsing a synchronized, percussive step dancing routine.

The men’s gestures — particularly a buff topless fellow in the center who, as he exhales, seems to ever so slightly levitate off the floor — reminded Coppin of the folktale “The People Could Fly,” about Africans who could fly but were sold into slavery and endured many miseries, until one day they flew to freedom. For Coppin, it’s a metaphor for the names, languages, religions, and history robbed from Africans when they were brought here as slaves, and the potential that that great legacy might be reclaimed and built upon.

Kerry Stuart Coppin, “Between Me and the Other World,” Bannister Gallery, Rhode Island College, 600 Mount Pleasant Ave., Providence, Oct. 4 to 26, 2007. 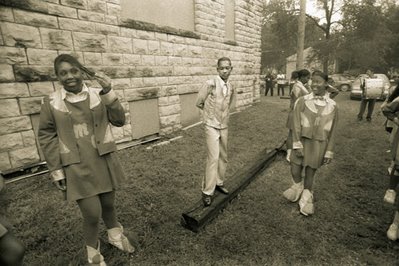