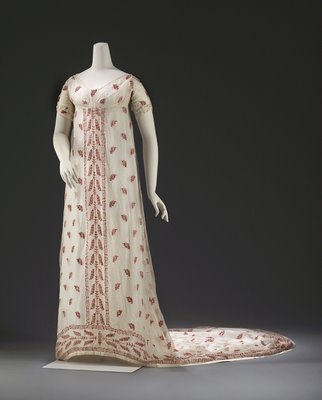 Something worth noting in the MFA’s Napoleon show is how the French Revolution was reflected in women’s fashion. Political liberation meant women

were freed from binding corsets and elaborate hoop skirts. The popular fashion became simple, loose, high-waisted "Grecian"-style dresses in thin cotton. (The MFA, I’m happy to report, presents them on appropriately Revolutionary off-with-their-heads mannequins.) After Napoleon fell, the corsets and hoop skirts returned. It’s part of cycle that you see repeated in America in flapper dresses of the 1920s and hippie styles of the 1960s and ‘70s. Each time political liberalization is reflected in less structured, looser women’s clothing. 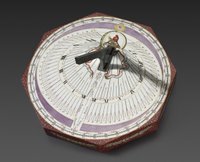 designers to reject the lavish baroque and rococo ornament of the ousted French royalty and adopt a sober, minimal style. Some of this new Enlightenment-era rationalism was short-lived. The MFA presents a sundial designed in decimal time – 10-hour day with 100-minute hours. The system was abandoned after seven months because people found it too confusing.