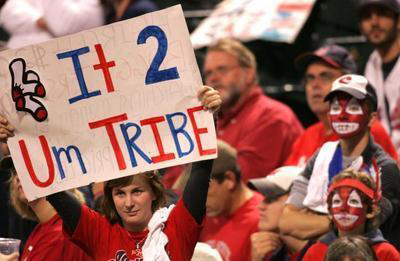 Watching the Red Sox play Cleveland, it’s been revolting to see Cleveland fans with faces painted like red clowns to resemble the Indians' team mascot Chief Wahoo (as seen above in a Cleveland Plain Dealer photo from game four in Cleveland). Isn’t this just the Native-American version of black face?

Hachivi Edgar Heap of Birds, who exhibited at this year’s Venice Biennale, has made searing art about Native American sports mascots, including his 1989 screenprint “Telling Many Magpies, Telling Black Wolf, Telling Hachivi” (below) and his 1998 lithograph “American Leagues” (at bottom).

I asked Heap of Birds what he thought of Cleveland fans in “red face.” He wrote back: "The act of representing red skins or red faces in regards to Native Americans is a direct link to the human skin, of Native people, which was taken from Native corpses for monetary bounty. The skin confirmed that the Native spirit had been murdered. The blood from the severed skin was red hence the color association. Each time a sports fan paints their face or chants out the 'Red Tribe' reference they are in essence skinning themselves in effigy. Perhaps this monetary bounty is still being taken as the sports teams of America reap financial benefits from an on going homage to filleted Native American flesh.”

Native Americans have protested the Chief Wahoo logo for years. The Cleveland group 500 Years of Dignity and Resistance has posted to its website a discussion of the origin of the logo. Also check out the illustrations in the site’s “multimedia” section, and the pins and poster in its “store.” 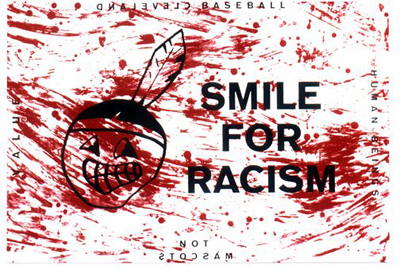