“Gods in Color” at Harvard 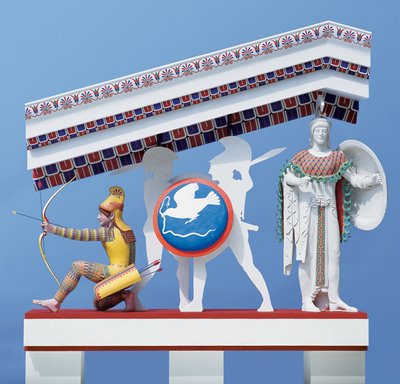 A striking exhibit at Harvard makes us see ancient Greek and Roman sculpture — and perhaps roots of racism — as few of us have before.

When we think of the ancient Greeks and Romans, we picture them among the sober silent white stone of their surviving sculptures and columned temples. But the exhibit "“Gods in Color: Painted Sculpture in Classical Antiquity,” at Harvard’s Sackler Museum, presents striking evidence that our sense of ancient sculpture is distorted because we’ve forgotten that the white marbles were once painted in bold Technicolor.

As I wrote in my review:

Based on two decades of detective work by German archaeologist Vinzenz Brinkmann, here some 20 plaster replicas have been painted to approximate the ancient sculptures’ original appearances. The look is disconcertingly garish. Vivid red, blue, and green scales cover a Greek warrior’s helmet. A funerary monument for another warrior depicts him in yellow-leather armor decorated with blue stars and a green and yellow lion’s head. All this color feels wrong, wrong, wrong. And it’s this visceral reaction that makes the exhibit so intriguing. ...

Our notion of ancient Greek and Roman sculpture seems to originate in the Renaissance. Europeans made painted sculpture up through the medieval, Romanesque, and gothic periods. But around the 15th century, as the Renaissance dawned, artists and leaders sought inspiration in ancient Greece and Rome. These civilizations were seen as heights of culture — as well as heights of power — that artists and rulers emulated. Renaissance discoveries of ancient Greek and Roman marbles with their paint worn off by centuries of exposure to the elements (and then cleaned) inspired the great unpainted marbles of artists such as Michelangelo — and centuries of sculpture that followed. ...

Unpainted Renaissance sculptures, arising out of ignorance of classical polychromy, seem to be where Westerners began equating bare carved stone with ancient ideals of strength, sobriety, nobility, simplicity, purity — ideas that became bound up with Western notions of race and ethnicity, of whiteness. These ideas continue to pop up in contemporary culture, most obviously in portrayals of Romans in Hollywood epics. Roman characters have often been played by Brits with Shakespearian airs, suggesting analogies between the Roman Empire and the British colonial empire, with its Anglo dominance of Indians and Africans. By reconstructing the color of these ancient sculptures, archaeologists are also restoring some of the ethnicity that was bleached out of the originals.