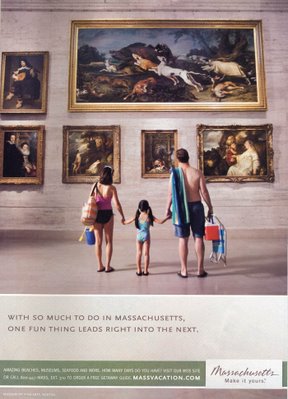 My fellow art world citizens, once in a while we gather to consider the state of our city’s art scene. As we gather this year, I think of our Institute of Contemporary Art. When the ICA opened in its new South Boston building in December 2006, getting the building built was itself rightly seen as an enormous accomplishment. (Applause.) The building also stands a challenge, as a sign that people in town are raising the stakes of what should be expected from Boston art. In the little over a year since, the ICA has struggled to live up to the enormous hopes and expectations raised by their opening bid, but this year looks promising for the ICA, with retrospectives of Anish Kapoor and Tara Donovan planned. (Applause.) But how are the rest of us living up to the ICA’s challenge, its dare to raise the level of our game? 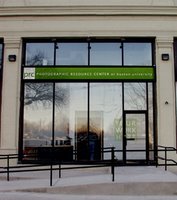 Today, Boston is on the cusp of a major transformation of the institutional infrastructure available for exhibiting modern and contemporary art. The new ICA building is just one sign of this. As it comes to fruition, we should see heavyweight art institutions here addressing contemporary art in a way that they have not since, say, Impressionism. (Applause.)

Boston’s Museum of Fine Arts plans to open an expansion in 2010 that promises to have more space for late-20th century and contemporary art than the new Institute of Contemporary Art. The Isabella Stewart Gardner Museum, the Harvard Art Museums, DeCordova Museum, and Rose Art Museum are all planning renovations and/or expansions.

Last year’s stellar Cornell retrospective at the Peabody Essex Museum (at left) is one example of how a building project (the Peabody Essex completed a renovation and expansion in 2003) can help a museum change its profile, and reshape the local institutional playing field. (Applause.)

But how does locally-made art fit into this? While we need to import major work from elsewhere for our edification, inspiration and amusement (the Cameron Jamie survey at MIT’s List Visual Arts Center was a strong example last year), how can we do more to incubate and champion great art here? If we don’t pay attention to art made here who else will? The point is not just to boost the careers of local artists, but that by encouraging cool people and cool stuff here we foster a more lively, compelling, entertaining community for all of us who live here. (Applause.)

One of the disappointments of the last year was that the Indianapolis Museum of Art’s retrospective of Brookline’s Maria Magdalena Campos Pons, one of our most acclaimed local artists, didn’t come to any New England venue.

That said, the MFA has done an interesting job of representing locally-made art, both recent and historical. It presents locally-focused prize exhibitions (Traveling Scholars, Maud Morgan prize), significant solo showcases (Laura McPhee), and even blockbusters (Edward Hopper, “Americans in Paris”). The ICA has paid attention to locally-made art in its permanent collection and prize exhibits like the biannual Foster Prize show. Local artists could be better integrated into the ICA’s group shows and the “Momentum” exhibition series.

And then there’s the DeCordova Museum (pictured at left), which is dedicated to showcasing New England art. Now is a good moment to consider how it fulfills this mission as the institution is in the process of finding a new director to fill the shoes of Paul Master-Karnik, who resigned at the end of last June after some 22 years leading the museum. DeCordova has a good record of selecting one or two great local artists each year among those in its Annual Exhibition. On the whole, its exhibitions tend to (accurately) reflect New England art’s emphasis on craftsmanship, but too often with works that are more competent than inspiring. It should renew its commitment to new media art, where it had been a leader but has fallen off since the departure of curator George Fifield. And I hope that the inclusion of The Institute for Infinitely Small Things in this spring’s DeCordova Annual is a sign that the museum will pay more attention to the conceptual end of the local scene. 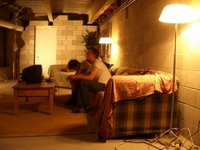 But any curator looking to emphasize local art is challenged by the continuing stuffiness and thinness of the Boston scene. It’s instructive to compare the Boston and Providence art scenes. Major excitement and surprises continually bubble up in Providence (“The Apartment at the Mall” and the Musée Patamécanique are but two recent examples) in a way that rarely happens in Boston. Instead in Boston we have the Mooninites corporate graffiti. And we have The Superheroes Project, which is an amusing goof, but note how it’s focused on developing publicity for art, rather than about making art, and involves borrowing existing ideas (superheroes), rather than inventing something new.

One of the reasons to look at Providence is that it demonstrates that new, exciting art can come from small places. It’s worth remembering that most major art movements begin as small groups of friends. Cubism, one of the most influential ideas of the past century, began with just two or three guys.

Of course, Providence has a significant advantage with RISD, one of the major art schools in the nation, and a magnet for artistic talent that Boston can’t equal. (Harvard and MIT are major magnets for talent in pretty much everything but art). Providence also has the nonprofit art center AS220, a major incubator of young artists, including the folks who formed Fort Thunder, the Hive Archive, Dirt Palace and the Musée Patamécanique. Some argue that, at least before Sept. 11 and the 2003 Station nightclub fire, Providence offered more affordable spaces and less official oversight (police, permitting, etc.) than Boston, which helped to foster art there. But, I think, the major difference between the two cities is that in some fundamental way Boston’s art scene is about fitting into existing institutions and projects, while Providence’s art scene is about developing your own thing. Boston needs more DIY spirit.

Some exciting art is percolating here. One group to watch is the iKatun and Institute for Infinitely Small Things gang (pictured at left). Their “Initiative for the Renaming of Names in Cambridge” and “The New American Dictionary: Interactive Security/Fear Edition” represent some of the smartest, funniest, most incisive art coming out of Boston. And they’re beginning to gain notice elsewhere. Beyond their politically-tinged brand of neo-Fluxus art, they’ve also organized, with artist Jane Marsching, public forums on race in Boston and the idea of the commons that have injected big ideas into the local discussion. (Applause.)

Also keep an eye on Boston’s new media art. The city stands out as one of the best places in the country for new media infrastructure with Axiom gallery, the Boston Cyberarts Festival, Art Interactive gallery, the Collision Collective and the journal Aspect. RISD recently named MIT new media artist and guru John Maeda to be its next president. Highlights of local work from the past year include Denise Marika’s video and braille installation at Axiom, Cliff Evans’s video installation at the Gardner Museum (Evans went to school in Boston and now teaches here, though he’s based in Brooklyn), and Andrew Mowbray’s video and props installation at Space Other. Much other locally-made new media work is promising, but still feels like it’s in a fledgling, testing phase.

I find myself in a (Clement) Greenbergian frame of mind regarding new media art – I’m most fascinated by works that take advantage of the specific properties of the new media to embody their content. That’s the promise I see in Bostonian Brian Knep’s computer and video projections, which use the computer’s knack for producing special effects and endless variations within set parameters to create distinctly digital art about natural systems, healing and aging. 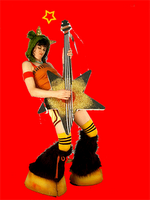 Promising art is also sprouting in Somerville. Folks there have been putting on cool creative festivals, from dancing and sculpture under the McGrath Highway overpass, to the Fluff Festival and Artbeat, to the Honk Fest. The Nave Gallery organized an exhibit of catch-as-catch-can work by the city’s “art gangs” this summer. Some of these artists have begun to cross over into the rest of the gallery scene, in particular with shows at Rhys Gallery. The wild assemblages of Elaine Bay (pictured at left), a member of the Miracle 5 collective, deserve special attention. Much of this Somerville stuff is still under development and messy, but it’s exciting to see its crackling rascally underground energy. (Applause.)