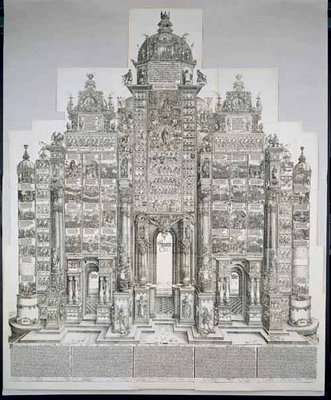 "Grand Scale: Monumental Prints in the Age of Durer and Titian," now on view at Wellesley College's Davis Museum, looks to be one of the best local exhibits of 2008. From my review:

We tend to think of old-master prints as small because most of the ones that survive could fit into books or albums where they were sheltered from light and wear. But the great exhibition "Grand Scale: Monumental Prints in the Age of Durer and Titian" at Wellesley College's Davis Museum shows that beginning in the late 15th century, artists stretched the technical boundaries of woodcuts, engravings, and etchings with multipage prints that rival tapestries and easel paintings in size and drama.

You have to see them in person to really get it. In reproduction, Jacopo de' Barbari's 1500 bird's-eye "View of Venice" is a tight maze of buildings, ships, streets, and canals. But in the gallery, the vista opens up to about 9 feet wide. The point of view feels more godlike than birdlike in its all-seeing, all-knowing vision. You understand why the marvelous woodcut - assembled from six unprecedentedly large carved wooden plates printed on six unprecedentedly large sheets of paper - was one of the first images to be protected by what we now call copyright.

Such large-scale Renaissance prints are rarely seen or discussed because few remain. So the 48 prints, dating from 1486 to 1636, that curators Larry Silver of the University of Pennsylvania and Elizabeth Wyckoff of the Davis Museum have assembled in "Grand Scale" produce a rare sort of exhibition - one that rejiggers our sense of history.