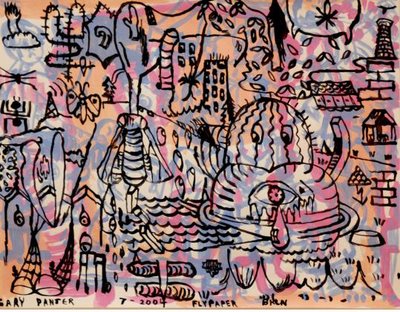 From my review of “Gary Panter: Daydream Trap” at Aldrich Contemporary Art Museum in Connecticut:

In the 1980s, Gary Panter was an Emmy-winning designer of fabulous sets for "Pee-wee's Playhouse." His illustrations have appeared in Time, Rolling Stone, Entertainment Weekly, and The New Yorker. One of the most important cartoonists to emerge in the late 1970s and '80s, his work was featured in the "Masters of American Comics" exhibition that opened at Los Angeles's Hammer Museum and Museum of Contemporary Art in 2005.

All this time he has painted, too, but somehow, while operating in plain sight, the 57-year-old has been one of those artists who float under the art world's radar.

Coming soon:
Excerpts from Panter's 2006 talk at RISD and my recent interview of him.

Looking forward to reading your interview with Gary Panter.