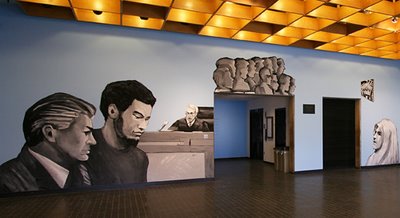 Walid Raad’s exhibit “We Can Make Rain But No One Came To Ask” at Brown University’s Bell Gallery, as I write in my review,

feels like a Borgesian detective story in which truth is elusive, and cities themselves shiver with post-traumatic stress disorder.

For several years, the Lebanese-born New York-based artist has made art about the Lebanese Civil War of 1975 to 1991. This installation, Raad writes, focuses on a single car bombing in Beirut in 1986. The gallery is filled with five long tables, with 44 sheets of paper laid atop them like evidence. A fractured, impressionistic 17-minute video projected on a wall of the gallery seems to cover some of the same territory.

“My photographs [of Beirut] began to manifest colors and lines that were, at times, significantly different from the ones available to my eyes,” Raad writes in a group of pages that depict buildings mirrored, turned upside down, cut-up, and blurred. “I came to believe that something in . . . the time and space of the [bombed] neighborhood may have been affected not only by the 1986 detonation but also by every other war, skirmish, and assault in Lebanon since 1975 . . . I decided to print my photographs even if I still doubted what I was seeing in them.”

Pictured: “I Feel A Great Desire to Meet The Masses Once Again,” which a sign says was painted by Elly Boueri at Raad’s request. Supposedly.