“Tree of Paradise” at Boston College 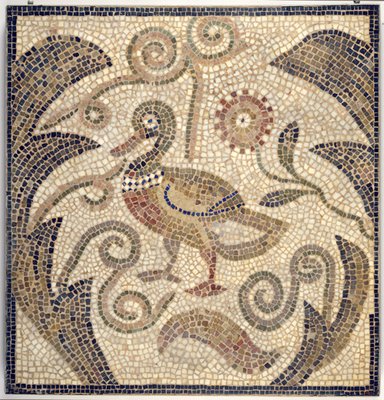 In 1883, French soldiers digging a garden for their captain behind his home in what is now Tunisia accidentally uncovered an ancient mosaic floor. It is believed to have been the ruins of a Jewish synagogue apparently built over the 1st to 6th centuries CE (AD). The find provided a glimpse into life of the Jewish Diaspora in the early centuries CE, and its integration into Roman society.

“Tree of Paradise: Jewish Mosaics from the Roman Empire” at Boston College’s McMullen Museum, reassembles portions of this find. The exhibit was organized by the Brooklyn Museum and drawn exclusively (well, except for some African slipware lamps) from its collection. The French army captain, Ernest de Prudhomme, later had the pieces shipped home to France, where the museum acquired some of them from an antiquities dealer in 1891. (The exhibit doesn’t explain what happened to the rest, but McMullen assistant curator Naomi Blumberg says the others ended up at the Bardo Museum in Tunis.)

To suggest what the whole floor would have looked like, Brooklyn’s temple mosaic fragments are laid out atop an enlarged version of a French corporal’s watercolor sketch documenting the floor as it appeared when they uncovered it. The designs are oriented to the side of the room, facing east, toward Jerusalem. A Latin inscription between a pair of menorahs suggests that a woman by the name of Juliana was a major funder: “Your servant, the girl … Juliana, paved the holy synagogue of Naro for her own salvation out of her own resources.”

The 21 mosaics are good – a lion, date palm, fish, dolphin, ducks, menorah – but relatively small in scale. (If you want to see a terrific ancient mosaic check out the Worcester Art Museum’s more than 20-foot-square Roman hunting scene from the early 6th century.)

It’s a charming, but modest show. And though there’s much here, one can’t help wincing at the floor’s gaps, which remind that the temple floor was broken up and divided. The overwhelming impression is a sense of what has been lost.