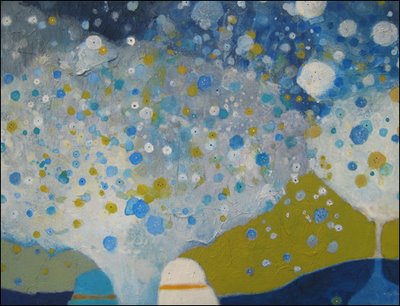 From my review of “Lovesick/Seasick” at Yes Gallery + Studio in Warren, Rhode Island:

I recently drove out to Warren to see YES Gallery + Studio, which opened at 146 Water Street in April. It was my first visit there, but the inspiration for the gallery’s name was a promising sign.

Owner Leigh Medeiros named it after Yoko Ono’s 1966 Ceiling Painting (YES Painting), which invited viewers to climb a step ladder and use a magnifying glass to discover the word “YES” printed on a panel on the ceiling. Ono’s relationship with John Lennon began after he wandered into a London gallery and up that ladder.

Medeiros writes on the gallery’s blog: “This is a quote by Yoko that I think is great, ‘There have been so many negative elements in my life, and in the world. I had to balance that by activating the ‘Yes’ element’ ... I also loved the idea of someone driving down Water Street, mulling over a decision, then looking up to see the word ‘YES’ on the gallery building. Who knows what things could come of such a bold ‘sign’?”