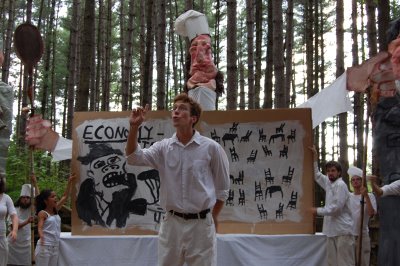 From my essay on Bread and Puppet Theater:

Nestled in the verdant mountain valley of Glover, Vermont, way up in the northern part of the state, is a farm of rolling meadows, pine forests, and gray barns, all under vast skies. It’s the home base of Bread and Puppet Theater, the landmark political troupe that has been pricking US presidents and policies with a unique brand of street theater since John F. Kennedy was in office. The theater has been resurgent since George W. Bush took the reigns in 2000, so I ask founder Peter Schumann, now that the ghastly Bush era is mercifully lurching to its end, what’s next? “To protest the new era that’s coming after the Bush era,” he says in his native German accent, “which is the same era as the Bush era.”

Schumann warns of a continuing era of gluttonous, bullying American consumerism, no matter who sits in the Oval Office. “It’s the sad late stages of this form of capitalism that can’t possibly be longer with us,” he says. “That will kill us for sure. . . . It just doesn’t work.” And he dismisses the notion that the advisors to a potential Barack Obama administration would be much different: “The same old mass murderers that were responsible for incredible events in this world like East Timor or the starvation of the Iraqis during the [’90s] blockade.”

Such fiery rhetoric is evidence of the continuing radicalism of a theater born in New York in 1962, when the fledgling experimental troupe made its name protesting the Vietnam War with papier-mâché masks and giant puppets.

Coming soon: An interview with Peter Schumann. It's divided into parts: one, two, three. Also, a whole bunch of photos of the troupe from my recent visit are here.

Bread and Puppet’s annual summer series wrapped up in Glover last weekend, but they’ll march in the Honk Parade from Somerville to Cambridge on Oct. 12, and perform in Providence at Brown University on Oct. 15 and 18, the Met School on Oct. 16, and Firehouse 13 on Oct. 19. The troupe returns to Boston Center for the Arts from Jan. 25 to Feb. 1.