New York artists Christo and Jeanne-Claude spoke about how they negotiate permission for their large public artworks during a panel discussion at Boston’s Institute of Contemporary Art on Sept. 23 that was organized by Harvard Law School, which gave the couple its 2008 Great Negotiator Award. Below are some excerpts. 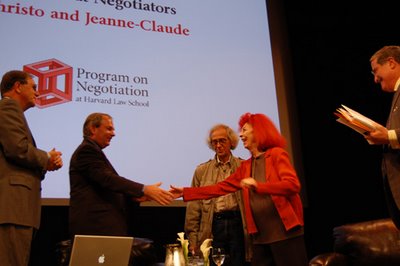 On winning support from California property owners to use their land for the 24.5-mile-long “Running Fence,” which was erected in 1976.
Jeanne-Claude: “Ranchers are very pragmatic people. They are hard workers. And they understood we are hard workers. And they are simple. And this one day, I had just finished another cup of coffee with Mr. and Mrs. –- … He say, ‘Well, I don’t know. When is your husband coming?’ And he was taking me to the door. And outside the door, right and left on the ground, I had an idea. Because inside the kitchen he had told me, ‘What good is it for, that fence? What does it do?’ And I say, ‘Well, it’s joy and beauty, it’s art for the pleasure.’ He said, ‘Well, it’s good for nothing.’ So there at the door I looked and I see something that I pretend I don’t recognize and I say, ‘Oh, what will come out of those leaves? Radishes? Potatoes?’ He say, ‘Oh, no, no, no, these are flowers.’ And I say, ‘Flowers? What are they for?’ And he say, ‘Honey, I got the message.’”

On winning French government support for “Pont Neuf Wrapped” in Paris in 1985.
Christo: “In March ’85, we have a call from the city, to fly back to Paris. They had a very, very serious problem with us. Not the mayor, it was a deputy mayor … she take us to lunch, we have a private lunch in a very fancy restaurant, special room. And she said to Jeanne-Claude, speaking in French, ‘For the good of France and the good of Mr. Chirac [then mayor of Paris], we should not do that project.’”
Jeanne-Claude: “And I say, ‘But the fabric has been sewn all for the 12 arches, the steel, everything is ready, and we have the permissions now, we have been waiting.’ And she said, ‘No you can’t.’ And I said, ‘Then it’s war.’ And she say, ‘What do you mean war?’ And I say, ‘Oh, very simple. We have a letter here, signed by Monsieur Jacques Chirac. We will show it to the media so they see that the signature of Jacques Chirac is worth nothing.’ That’s not negotiation. And so we did wrap the Pont Neuf. And, of course, guess what, Jacques Chirac was in the middle of the bridge kissing all the babies.” 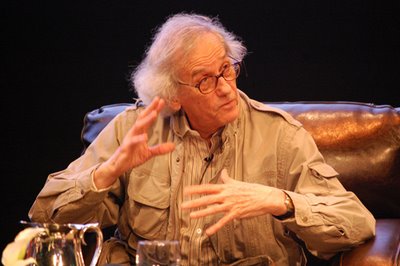 On winning German government support for “Wrapped Reichstag” in Berlin in 1995.
Jeanne-Claude: “Over 600 parliamentarians, we have to meet them one by one in the office for the permit. But our big enemy was the chancellor of Germany, Helmut Kohl, who would not give us an appointment. He never answered out letters. And we did not know Mrs. Kohl, his wife. But we knew he had a girlfriend, Johanna, and we tried to find the address of her hairdresser.”

Related:
My review of "Christo and Jeanne-Claude: The Würth Museum Collection" at the Portland Museum of Art in 2005. 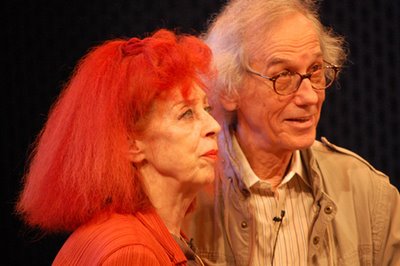 I have always loved and admired their work, but was really disappointed when I heard them speak at the Kitchen in NYC a few years ago. They seemed arrogant, aloof, anti-intellectual, anti-conceptual, as if their only intentions were formal and aesthetic.