Triceratops unveiled at Museum of Science

Boston’s Museum of Science unveiled a rare, nearly-complete triceratops skeleton this morning. The 65.6-million-year-old, 22-foot-long skeleton (said to be about 70 percent complete) was discovered in South Dakota in 2004. Featured in the new “Colossal Fossil” exhibit opening Nov. 15, it’s believed to be one of only four known, nearly-complete triceratops skeletons on public display in the world.

The fossilized remains were sold at auction at Christie’s in Paris in April 2008 for $942,797. The anonymous buyer, “who had loved visiting the Museum [of Science] as a child,” has offered it to the institution as a long-term loan. 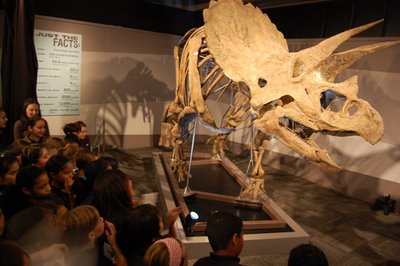